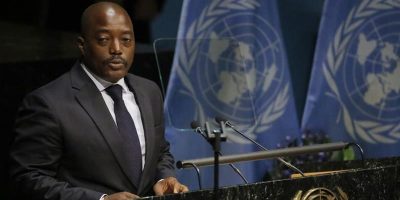 US threatens sanctions on anyone delaying DR Congo vote

The US says it’s ready to act against efforts to hinder the DRC’s already delayed election to replace President Kabila.

DRC President Joseph Kabila refused to step down at the end of his second elected term in December, sparking protests that killed dozens [File: Carlo Allegri/Reuters]

The United States on Tuesday threatened to impose further targeted unilateral sanctions on anyone who hinders Democratic Republic of Congo’s already delayed preparations for an election to replace President Joseph Kabila.

The country’s election commission president said on Sunday that the vote, originally due in November 2016, was unlikely to take place in 2017, because of delays in registering millions of voters.

“We are ready to take additional action to sanction those who stand in the way of DRC’s first democratic transition of power,” US Deputy Ambassador to the United Nations Michele Sison told the UN Security Council.

The US imposed sanctions on several Congolese officials last year – blocking any financial assets in the US and generally barring Americans from engaging in financial transactions with them.

“The Security Council should also consider targeted sanctions to reduce the violence in the DRC and help pressure all stakeholders to play a more constructive role in moving the country forward,” Sison said.

Kabila has refused to step down at the end of his second elected term in December, sparking protests that killed dozens of people. Militia violence has also intensified across Congo, raising fears the country will slide back into the wars at the turn of the century that killed millions.

The IMF has told Congo that “a credible path toward political stability” will probably be a condition of any assistance package, a letter seen by Reuters showed on Tuesday.

Under an accord struck on December 31 between Kabila’s representatives and opposition leaders, Kabila, in power since 2001, is barred from trying to change the constitution to stand for a third term.

About 80,000 people have fled fighting between the Congolese army and a new rebel coalition, the United Nations said on Tuesday.

UN peacekeeping chief Jean-Pierre Lacroix told the council that worsening violence had led to a sharp increase of 26 percent in the number of displaced people over the past two months to reach 1.3 million.

Lacroix cited “disturbing reports of summary executions and rapes including of civilians by the security forces” and that “dozens of mass graves” have been reportedly uncovered in Kasai province, in which more than 3,000 have reportedly died since last October.

A UN commission of inquiry has been established to investigate the killings in the Kasai while a separate UN panel is preparing to release this month the findings of its probe of the murder of two UN experts.

The bodies of American Michael Sharp and Swedish Chilean Zaid Catalan were found in March, weeks after they had disappeared while investigating reports of mass graves in the Kasai.

Source: News agencies
Africa Democratic Republic of Congo
Tell us what you think