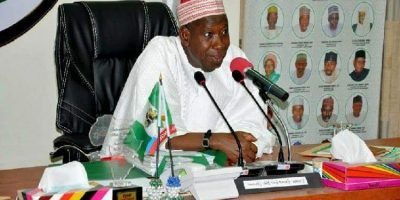 Governor Abdullahi Ganduje of Kano State has said all northern governors are fully against ethnic prejudice.

Ganduje said this on Friday when he received leaders of the Igbo Delegates Assembly, led by its President-General, Chief Chi Nwogu, at the Government House, Kano.

The Coalition of Northern Youth Groups had called for Igbo to leave the region within three months.

The governor said, Even if you want to go on your own, we will not allow you to leave. There is a difference between .

I will not go and there is no where I can go.You don’t have anywhere to go. This place is your home. Igbo in the region will stay forever.

Those advocating ethnic agitation from the East are not speaking for all Igbo. Those of us, who as youths witnessed the civil war, will never advocate secession.

The governor said the northern youths that issued the notice to Igbo in the region had been called to order by elders, civic and political leaders, including governors and the Sultan of Sokoto, who believe in one Nigeria.

He added, When you have youths who have no elders, they are similar to riding a horse without a bridle. They can behave anyhow and anything can happen.

This is what is happening. What is happening in Sudan is a lesson for all of us. The breakup of that country has not taken them anywhere. We cannot afford to make that kind of mistake.

In his remarks, Nwogu said the group was in Kano to also meet with the northern youths that issued the notice to quit.

In a related development, the coalition and the leadership of Ndigbo in 19 northern states commenced a resolution meeting in Kano on Saturday.
Sources at the meeting told our correspondent that it was meant to resolve the current crisis.