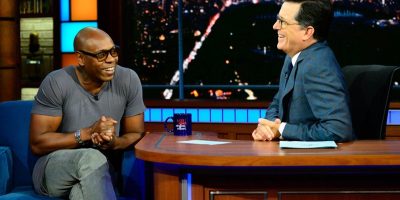 In the last six months, I think we’re all getting an education about the presidency. I don’t think, in the popular discourse, I’ve ever heard people discussing ethics this much, Chappelle said on The Late Show Wednesday night.

I didn’t even realize how ethics were supposed to work at that level of government. And he’s putting all this stuff on the forefront.

Dave Chappelle regrets telling people to give Trump a chance’

Colbert, however, wasn’t buying that line.

Well, nobody really talks about oxygen until someone’s got their hands around your throat, he said.

In his 10-minute SNL monologue in November, Chappelle, making his first major TV appearance since Chappelle’s  Show ended in 2006, spoke about riots in Portland and the relationship between the then-President-elect and minorities.

I’m gonna wish Donald Trump luck, and I’m going to give him a chance, and we the historically disenfranchised demand that he give us one too, he said.

Chappelle, however, said he was trying to contextualize the election.

Because a lot of white Americans finally got a chance to see what an Election Night looks like for many black Americans every cycle, he said Wednesday night.

I think he’s going to make a more informed and better voter. I think people will figure it out. He’s a polarizing dude. He’s like a bad DJ at a good party.