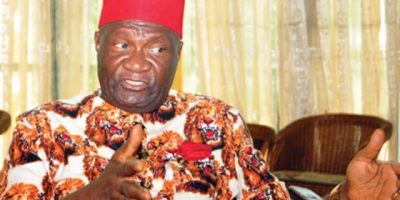 The Ohanaeze Ndigbo, the pan-Igbo socio-cultural organisation, has expressed worry over the silence of some northern leaders on the anti-Igbo song currently trending on the social media and around the country.

President General of Ohanaeze, Chief John Nnia Nwodo, said in a statement thursday that the federal government appeared to have turned a blind eye to the danger this portends to the unity of the country.
According Nwodo, the current Hausa hate song in the social media is not only despicable but sad and disappointing.
Ohanaeze is appalled that prominent leaders in the North (with the exception of a few), have allowed this development to flourish without reproach, he regretted.

Nwodo further noted that the Arewa youths have stoked the embers of hatred by issuing a quit notice order to fellow Nigerians to leave their region, adding that the toleration of their criminal conduct has portrayed the federal government as biased and unfair.

Their quit notice to fellow Nigerians to leave any part of Nigeria strikes at the fundamental rights of citizenship. It is a call for the dissolution of the country.

The Ohanaeze president stated that the declaration for mob action after October 1 to deal with those who resist their quit notice order is a declaration of war.

It is surprising that on top of all these a hate song calling for more hatred, despise and abortion has been allowed to fester. Yet no one is arrested.

All the orders of arrest from Kaduna State and the IG seem to be ambivalent and unreal. The youths meet freely with governors of northern Nigeria and Nnorthern leaders showing that they enjoy their support.

This development signals the beginning of a national catastrophe which if not nipped in the bud, will snowball into incalculable damage to our continued existence as one country.

Ohanaeze gives notice to the federal government to deal with this situation decisively or forever be held responsible for the consequences this abdication of responsibility provoke, he warned.