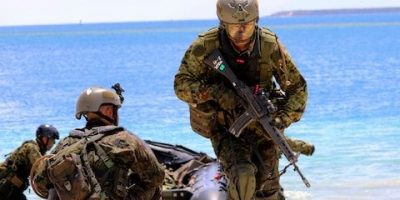 BEIJING China won’t come to North Korea’s help if it launches missiles threatening U.S. soil and there is retaliation, a state-owned newspaper warned Friday, but it would intervene if Washington strikes first.

The Global Times newspaper is not an official mouthpiece of the Communist Party, but in this case its editorial probably does reflect government policy, experts said.

China has repeatedly warned both Washington and Pyongyang not to do anything that raises tensions or causes instability on the Korean Peninsula, and strongly reiterated that idea Friday.

China hopes that all relevant parties will be cautious in their words and actions, and do things that help to alleviate tensions and enhance mutual trust, rather than walk on the old pathway of taking turns in shows of strength, and upgrading the tensions.

In an editorial, the Global Times said China should make it clear to both sides: when their actions jeopardize China’s interests, China will respond with a firm hand.

China should also make clear that if North Korea launches missiles that threaten U.S. soil first and the U.S. retaliates, China will stay neutral, it added. If the U.S. and South Korea carry out strikes and try to overthrow the North Korean regime and change the political pattern of the Korean Peninsula, China will prevent them from doing so.

The warning comes at the end of a week of threats and counterthreats between Washington and Pyongyang, and as the United States weighs its options to deal with the threat of North Korea’s nuclear and missile program.

The brinkmanship weighed on world financial markets for a fourth consecutive day. Main indexes were down in Frankfurt and Paris, and London’s FTSE 100 touched its lowest level since May. Asian markets also slumped, including South Korea?s KOSPI, dropping 1.8 percent. The Dow Jones industrial average was largely flat after the opening bell.

On Tuesday, President Trump threatened to respond to further threats from North Korea by unleashing fire and fury like the world has never seen. Pyongyang in turn threatened to strike the U.S. territory of Guam in the Western Pacific with ballistic missiles.
A B-1B Lancer bomber prepares to take off from Andersen Air Force base, Guam, on Aug. 7. (Richard P.

The paper’s comments reflect the 1961 Sino-North Korean Treaty of Friendship, Cooperation, and Mutual Assistance, which obliges China to intervene if North Korea is subject to unprovoked aggression  but not necessarily if Pyongyang starts a war.

The key point is in the first half of the sentence; China opposes North Korea testing missiles in the waters around Guam, said Cheng Xiaohe, a North Korea expert at Renmin University of China in Beijing.

With the situation on the Korea Peninsula sliding dangerously toward the point of no return, Chinese media are starting to declare their positions on any potential war, he said. Secondly, in a half-official way, China is starting to review and clarify the 1961 treaty.

China has become deeply frustrated with the regime in Pyongyang, and genuinely wants to see a denuclearized Korean Peninsula. But it has always refused to do anything that might destabilize or topple a regime which has long been both ally and buffer state.

That’s because Beijing does not want to see a unified Korean state allied to the United States on its border: Indeed, hundreds of thousands of Chinese soldiers died during the 1950-53 Korean War to prevent that from happening.

So for now, the current uneasy status quo for China still seems better than the alternatives.

That is doubly true ahead of an important Communist Party Congress in the fall, at which President Xi Jinping wants to project an aura of stability and control as he aims to consolidate his power at the start of a second five-year term.

Nevertheless, experts said debate is underway behind the scenes in China about its support for the North Korean regime.

In an article on the Financial Times China website in May, for example, Tong Zhiwei, a law professor at the East China University of Political Science and Law in Shanghai, argued that China should make terminating the 1961 treaty a near-term diplomatic goal, because North Korea, also known as the DPRK, had used it as cover to develop its nuclear program and avoid punishment.

That, he wrote, was not in China’s interests.

In the past 57 years, the treaty has strongly protected the security of the DPRK and peace on the Korean Peninsula, but it has also been used by the North Korean authorities to protect their international wrongful acts from punishment, he wrote.

Meanwhile, China has reacted strongly to the United States sending a warship close to an island it controls in the South China Sea.

The U.S. Navy destroyer, USS John S. McCain, traveled close to Mischief Reef in the disputed Spratly Islands on Thursday, in the third freedom of navigation exercise in the area conducted under the Trump administration, Reuters reported.

The Chinese side is strongly dissatisfied with this and will lodge solemn representations to the U.S. side, the ministry said in a statement.