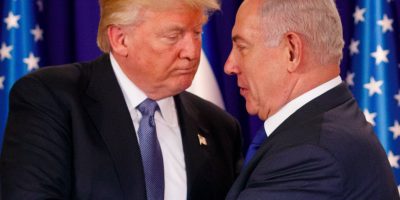 Israel is ramping up settlement building in the contested West Bank.

Notably, some of the newly approved settlements would be deep in the West Bank, a contested territory under Israeli control where most Palestinians live.

The Trump administration has pushed Israel to limit  but not end  settlement building.

Israel is once again ramping up settlement building in the contested West Bank  and it could have dire implications for President Donald Trump’s plans for a peace deal.

A new report from anti-settlement monitoring group Peace Now, cited by the Associated Press, noted that 6,742 settlement homes have been advanced this year. Comparatively, 2,629 homes were approved in 2016 and 1,982 in 2015.

Notably, some of the newly approved settlements would be deep in the West Bank, a contested territory under Israeli control where most Palestinians live. The final status of the West Bank, as well as Gaza and East Jerusalem, would likely be determined in peace talks.

The Trump administration has pushed Israel to limit  but not end  settlement building.

It would be politically near-impossible for Palestinian leadership to enter negotiations as Israel amplifies its settlement building, Daniel Kurt zer, a former US Ambassador to Israel and Egypt, told Business Insider earlier this month, before the latest round of settlements was announced.

“Renewed Israeli settlement activity will make it extremely difficult, perhaps impossible, for Abbas to muster the political support necessary to enter negotiations,” Kurtzer said. “The question is how the US administration will respond to renewed settlement activity.”

The response so far seems to be tacit support. The White House clarified after the settlement buildup was announced that the US believes “unrestrained” settlement building does not advance peace, but also that a building freeze would not have an impact.

“President Trump has publicly and privately expressed his concerns regarding settlements and the administration has made clear that unrestrained settlement activity does not advance the prospect for peace,” the White House said, in a statement to the Jerusalem Post.

“At the same time, the administration recognizes that past demands for a settlement freeze have not helped advance peace talks.

This is a distinct departure from former President Barack Obama‘s policy towards settlements. During his first year in office, Obama publicly pushed for a settlement freeze. In an interview in January 2017, his final month as president, Obama said that he and then-Secretary of State John Kerry had personally appealed to Israeli Prime Minister Benjamin Netanyahu to stop settlement activity “countless times.”

Other global powers  including the EU, France, and Germany  also criticized the recent settlement approvals.

And Palestinian leaders were quick to decry Netanyahu’s announced settlement buildup this year.

After Netanyahu recently pledged to build thousands of new homes in one of the West Bank’s biggest Jewish settlements and annex it to Israel, a senior adviser to Palestinian President Mahmoud Abbas called the prime minister’s comments “totally unacceptable.”

“This is an attempt by Netanyahu to destroy the two-state solution and a clear refusal of any attempt to revive the peace process, especially by the United States,” Abbas aide Nabil Shaath told The Associated Press.

Mohammad Dahlan, a controversial Palestinian leader, seemed to echo these sentiments while speaking with Reuters recently. Describing the “complete Judaization of the West Bank,” he said, “There is no political horizon.”

“The chances of the so-called ‘deal of the century’ is zero because Netanyahu does not want peace, and he imposed a reality of 700,000 settlers in the West Bank and in Jerusalem that made it impossible for the two-state solution to be implemented,” Dahlan said.

This latest impasse could torpedo Trump’s goal to reach peace in the region.