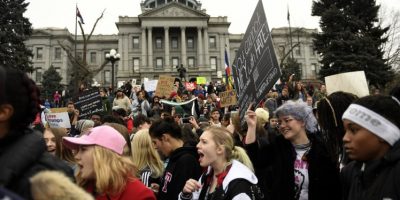 Millions of people turned out for the DisruptJ20 protest on January 20 (Picture: Getty Images)

A web hosting firm is locked in a battle with US government prosecutors, who lodged an Orwellian request for data on millions of visitors to an anti-Trump protest site.

The firm, DreamHost, is fighting the warrant seeking to identify visitors to the site DisruptJ20, which organised a demonstration against Donald Trump at the time of his inauguration on January 20.
July 2017 was the hottest July recorded on Earth in 137 years

DreamHost said in a statement on Monday that the US Justice Department was asking for more than 1.3million visitor IP addresses, along with email addresses and other data, in an effort to determine who simply visited the website.

It added that the government’s request violated the principle of free speech, as well as other rights.

That information could be used to identify any individuals who used this site to exercise and express political speech protected under the Constitution’s First Amendment, the statement said.

That should be enough to set alarm bells off in anyone’s mind.

US government tries to collect data of everyone who visited anti-Trump website
The Feds want Dreamhost to hand over details of all 1.3million people who visited the site (Picture: DisruptJ20)

Mark Rumold, from the Electronic Frontier Foundation, warned in a blog post of the staggering over breadth of the search warrant, and called the move an unconstitutional effort to prosecute Trump’s political opponents.
Security guard identified as man who rammed his car into restaurant near Paris

No plausible explanation exists for a search warrant of this breadth, other than to cast a digital dragnet as broadly as possible, he said.

But the [constitution] was designed to prohibit fishing expeditions like this.

Dream Host’s legal brief said the company previously turned over data in response to a subpoena on the organiser of the website, but that the additional information sought by prosecutors would endanger the First Amendment interests of the innocent third parties who viewed or communicated with the website.

The case is due to have a hearing on Friday.