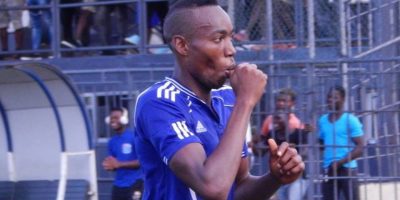 LISCR FC striker Christopher Jackson celebrates one of his goals, an act that signaled the birth of his first child (Photo Credit: T Kla Wesley)

LISCR FC striker Christopher Jackson is performing up to expectation, as compared to phase one of the league season, team Coach Tapha Manneh has said.

In an interview with this paper, Coach Manneh said striker Jackson?s performance in the second half of the season is much better than during the first.

According to the 52 year-old, his striker found it difficult during the earlier stages of the league due to his playing position on the pitch. As a point striker for the team, Jackson netted four league goals out of 11 appearances.

Following the climax of first half of the league, Jackson, 20, in an exclusive interview with Daily Observer, expressed disappointment with his performance, adding that he was provided all necessary support from his teammates as the point man, but did not utilize the opportunities.

But there has been a difference since the start of phase two.

According to Coach Manneh, who has guided his team to this year?s FA Cup final, striker Jackson was given a chance to play from the flanks, and has proven to be a better striker.

?At first he found it difficult to score goals from right in front of goal, but now he has more space from the flanks that allows him to score more goals,? the Gambian tactician said.

His late equalizer against FC Fassel helped his team to advance to the finals after teammate Robert Mensah scored the winner in the team?s 2-1 victory.

He also converted a penalty in the team?s previous league game against Invincible Eleven that extended its unbeaten league run of 21 matches.

Recently, the striker was called up by national team head coach James Debbeh for the Lone Stars friendly against Sierra Leone, where he scored the lone goal to defeat the Leone Stars. He also netted the only goal when Liberia defeated Mauritania in its away fixture of the 2018 CHAN qualifiers.

The 20-year old striker has so far scored 12 goals in all competitions for his club and two for the national team this season.