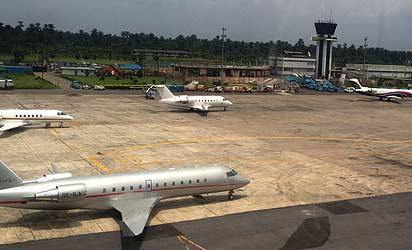 Videos showing water leaking from some parts of its roof were still trending yesterday after Thursday’s morning rain in Lagos.

The cooling system only functions intermittently. The departure and arrival halls have fallen short of standards and a good reflection of decay of infrastructure in Nigeria.

The Akanu Ibiam in Enugu is supposed to wear international toga but it appears to be competing with the Lagos Airport for the wrong reasons too. One of the things that mark it out is the three kilometre runway.

It is bumpy and without approach lights. How does it feel when your plane is landing or taking off from Enugu Airport? A flight to the Coal City will make you appreciate and rate this airport they say is international.

There’ s no sustainable water supply to the airport and† the air conditioners in both the departure and arrival halls are not functional. Passengers waiting for departure times are lucky if they have newspapers in their possession.

They don’t read them but use them to fan themselves. And should such an airport lack approach lights and other facilities that should be part of normal airports?

According to a source at the airport, it is for the above reasons that the airport does not take night flights. Only one international airline, Ethiopian airline flies Enugu.

They operate three times a week. Recall Governors of the South East had raised the alarm last year about the airport. Chairman of South East Governors Forum, Engr.

Dave Umahi, after one of their meetings in Enugu, last year, said: We are aware that the contract (for Akanu Ibiam Intíl Airport) was awarded to the company that resurfaced the tarmac but we dont know whether the tarmac is worse on such completion of the sections.

Some of you had also travelled and on landing, you see very stiff efforts being made by the pilots to land. Its not safe for our people at all, so we have to ask the minister to please come as a matter of urgency.

Also there is runway light recently installed but it’s as good as nothing because the brightness is not there at all and then you have a case where as an international airport, no flight can land from 6:30pm, thats not acceptable.

There is also one building that is in front of the airport that was destroyed, maybe, by thunderstorm, it won’t take federal government much to fix it, it’s an eyesore.

So we request that the Honurable Minister of State for Aviation should please, as a matter of urgency, and for the sake of the lives of our people, and of course other Nigerians do immediate intervention by visiting and directing the contractors to come and do the right thing.

French rappers set date for 2m-euro cage fight Aside a communication mast near the airport, the closeness of Oye Emene market to the airport and inability to have dependable water supply for fire fighting in case of emergency are not good stories about the airport.

There are also community issues on land compensation which hindered installation of the approach lights on the runway.

The Enugu state government agreed to wade into some of the issues such as the relocation of the market, dismantling the mast and resolving the host community land issue.

Nigerian airports witness milestones under Buhari – FAAN A committee to that effect was inaugurated, last year, under the chairmanship of the state commissioner for Enugu Capital Territory Development Authority, Mr. Chidi Aroh.

Aroh told Saturday Vanguard that his committee has been working round the clock to remove the obstacles hindering development at the airport.

While the committee is being awaited to resolve some of the issues, the Nigeria Customs Area Comptroller, Enugu, Anambra, and Ebonyi States, Mr. Suleiman Mohammed attributed the poor revenue generation of the agency within the command in 2018 to the poor facilities at the International Airport.

Mohammed revealed that international airlines such as Air France, Emirates Airline and KLM Airline had wanted to commence flights to Enugu but could not because of lack of facilities including adequate water supply at the airport.

He also decried the poor state of the airport tarmac and the State of the runway as major problems requiring urgent attention at the airport.

He pointed out that the poor state of facilities at the airport has hampered business activities resulting in low revenue for the agency.

According to data released by the comptroller, the 2017 revenue target of customs in the three states was Ten Billion, Eight Hundred and Forty One Million, Fourteen thousand, Three Hundred and Eighty Three Naira (10,841,014,383,56).

Meanwhile, the Nigerian Civil Aviation Authority, NCAA, and Federal Airports Authority of Nigeria (FAAN) that last year certified Akanu Ibiam International Airport, Enugu safe for operations after the inspection of the facility by the two agencies, after an earlier condemnation of the airport by South East governors are yet to react to the identified problems at the airport.

A delegation from FAAN and the NCAA visited the airport and gave conditions that should be met for flights to operate beyond 6:30pm.

The leader of the delegation and Director General of the NCAA, Captain Usman Muktar who gave the runway a clean bill of health said that aside constant maintenance the runway was still safe and of world standard. According to Muktar :The runway is of standard in terms of safety, we came here by air , landed safely.

Except for the runway quality which a lot can be done to improve on the quality. We need to do short-term maintenance to ensure this is maintained and to ensure a longer lifespan. The runway is safe.

Ethiopia comes at least three times in a week, they come and land, same runway. A Boeing 777-200 series has been coming, so generally speaking the runway is safe, very safe.

However, it lies with government policy to ensure that whatever is done is done in international standard and done properly to ensure we rehabilitate the runway.

He also explained to the Enugu government that for the airport to be certified for night operations, the equipment have been procured but for them to be installed the state government needs to remove all obstructions on the path of the runway.

He particularly made mention of the market and the Methodist School, close to the runway.

Managing director of FAAN, Engineer Saleh Dunoma  who was represented at the inspection tour by the Director of Engineering, Salisu Daura said the airport authority was going to fix any challenges as soon as possible.

However, as at the time of writing this report the cooling system is the lounges is not working. FAAN just informed Saturday Vanguard that new air conditioners will be installed this weekend at the airport.

This is a fall out of Saturday Vanguard investigations and enquiry from the agency after a senior editor of the newspaper communicated his experience in Enugu to the Aviation Desk. they have to get clearance from FAAN Headquarters to speak on sensitive issues on Nigerian airports.