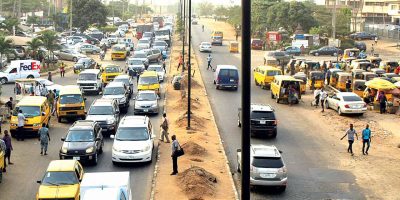 It is indeed remarkable that even as controversy persists on responsibility for roads construction and rehabilitation in the country, Lagos State government has reportedly flagged off the construction of the access road to the international airport after receiving the approval from its legal owner and custodian, the federal government.

Although many states in the country have acted in a similar fashion on segments of federal highways passing through their cities, this step in Lagos stands out as the most ambitious, in terms of cost and scope.

And so it deserves some attention as contextual issues in federalism and development, a subject that has gained fervent currency in the polity. Besides, the development has thrown up some issues of opportunity cost, given the condition of secondary and tertiary roads in Lagos area.

The project involves rehabilitation of a segment of the 10-lane Apapa-Oshodi-Oworonsoki federal highway, and the expansion of the link to international airport terminal. The access road will be reconstructed into a ten-lane expressway in which three express lanes will be separated from two lanes for local traffic for the abutting Ajao Estate and Mafoluku.

The first part of the works takes off from the Transport Hub already under construction at Oshodi interchange to the exit to international airport. This entails massive reconstruction of the section, involving excavation and replacement of existing but silted drainage system. This is the most challenging part of the multi-billion Naira project.

The second part requires the acquisition of adjoining land on which there are existing structures housing banks, hotels, offices and residences. The buildings to be demolished have been identified and marked.

The universal requirements of Resettlement Action Plan must be complied with and these entail negotiations and acceptance by the aggrieved parties. If there are any disputes and subsequent recourse to arbitration, this could drag on unless the state ensures speedy settlement.

It is believed that Lagos state government that has in place an effective alternative dispute resolution mechanism will handle such should they arise in the course of this very critical national project to be completed within 15 months.

In the economics of public projects, whenever the costs of compensation are prohibitive, this often becomes a deterrent, especially because there are multiple demands on the resources of government. There are those who have raised questions about the justification and opportunity cost of the estimated N50 billion price tag.

They make a case for many secondary and tertiary roads that are full of potholes and need urgent attention. This makes sense but the airport road project has become an ancient source of shame to the country and the state that has been regarded as the economic capital of West Africa.

When the questions and criticisms on the project are considered, the irrefutable fact of history is that that every tenured administration decides its priority project and legacy it will bequeath to posterity.

A Lagos State that is rebranding itself had to be concerned about the first impression of a visitor arriving in the country through the state. At present, the visage of squalor that abuts access to Nigeria”s leading airport could not be ended soon enough without this special intervention.

Some of the secondary roads are state roads. The tertiary roads, the streets to our homes, are the responsibility of the local governments. This tier of government is yet to wake up to its responsibility for road building.

Now that some states have carved out Local Development Units, they must carry out an inventory of roads in their domain and plan a systematic improvement on an annual basis.

In our urban areas, a policy of improving a street or two every year will eventually lead to the attainment of clean neighbourhoods because good roads are an indication of better living.

Certainly the Local Governments have the responsibility for routine maintenance of streets and they must set a goal of zero tolerance for potholes. This too should concern state governors who should involve the local government councils in building and rebuilding projects.

So many state governments are generally believed to be overbearing in this regard. They should begin devolution of powers in the states too before asking for such from the federal authorities in Abuja.

While Nigeria is yet to establish an agency for funding and administration of roads, there is an annual meeting of the National Council of Works, involving Federal and State officials responsible for roads and housing. However, with specific aspects of public works already carved out as separate ministries or agencies, there is a need for a periodic national forum on roads.

Each state must institute a similar forum of State and Local Government officials responsible for roads. This is where responsibility can be shared and spelt out. It is not just on paper but indeed and there should be no guile.

Once again, the Lagos State project brings to the fore the experiences of other states which developed segments of federal highways. In our ancient cities, after the demolition of structures for the expanded right-of-way, there are shanties and slums behind the parapet of modern expressways through neighbourhoods. The subsequent improvement of such adjoining areas must be included in the development agenda.

As a complement to such initiatives by state governments, it is important to plan for the improvement and regular routine maintenance of roads and streets used by citizens on a daily basis.

While the Federal government administers national roads and the State governments do the same for state roads, it is necessary to harp on the Local Governments that their failure concerning roads is giving the nation and states a bad name. The enforcement of tier responsibility for roads will be a relief to the federal government on some of the heavy burdens at the centre.

In our nation?s experiences of federalism and unitary governance, there have been cases of special dispensations to the regions or states for developing the road aspect of our critical national infrastructure. This is why the development in Lagos should be seen as a key aspect of why the current heated debate on restructuring should not be politicised.

In other words, there should be a cognitive restructuring (renewing of minds) at the centre that should look into ways of redrawing Nigeria?s road maps and devolve some responsibilities to the states accordingly.

That is what the experiment in Lagos has thrown up: that there are too many federal roads in the states they can no longer maintain and so that should be part of the discussion on restructuring construct the governing Party is developing at the moment.