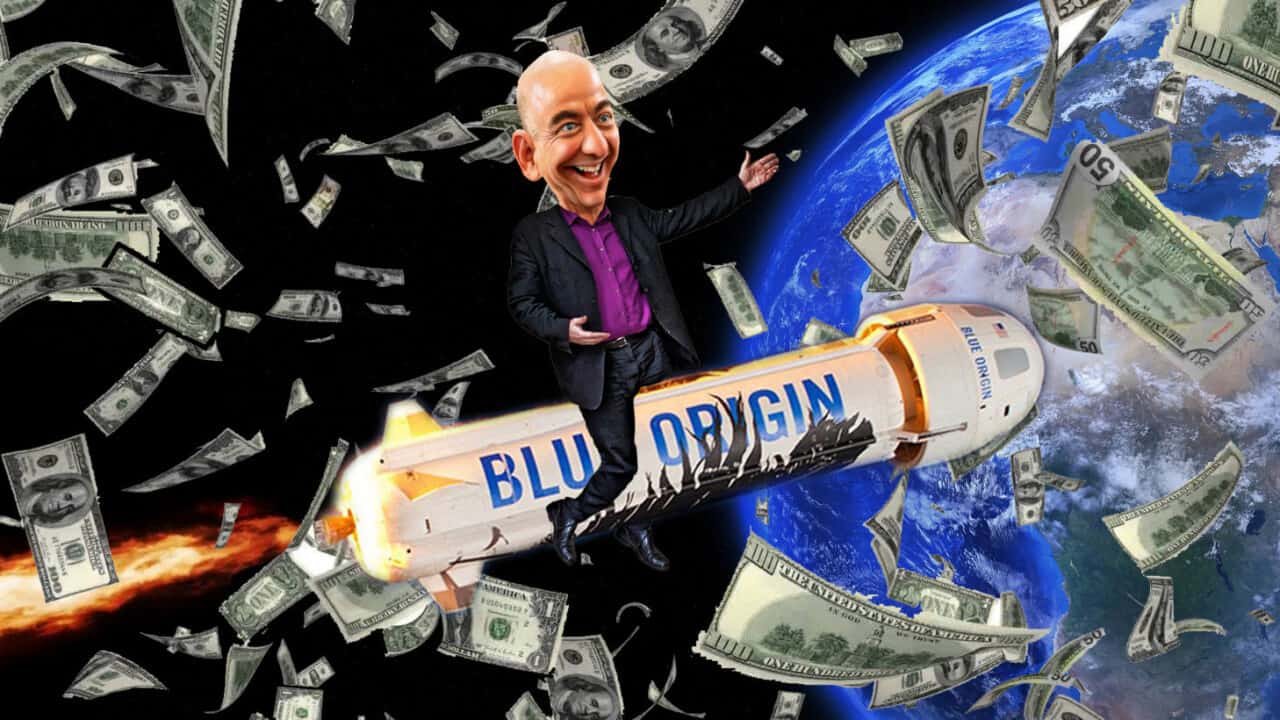 Jeff Bezos wants to build a “road to space” so 1 trillion humans can live and work there.

Why it matters: His rocket company, Blue Origin, has been methodically working toward launching people and payloads into space, funded by Bezos’ billions. But he is thinking bigger, and his money and influence give new gravity to the idea of permanently extending humanity’s reach deep into the solar system.

As Bezos sees it, humanity’s space-faring future shouldn’t necessarily hinge on making unlivable worlds like the Moon or Mars habitable.

“This is a very different kind of space colony,” Bezos said at a press event last week where he described his vision of near-Earth rotating space stations, called “O’Neill colonies” or “O’Neill cylinders,” that could replicate Earth’s cities.
All of this would be possible because of resources provided to us in space, according to Bezos.
If humans find a way to mine the moon for water, for example, it could act as a fuel source that would power further exploration.

What remains unclear, however, are the ethics of this colossal rezoning. If we outsource pollution-producing industries to space stations above Earth, what happens to the workers who have to maintain them?
If the future hinges on mining the pristine bodies in our solar system for resources, what about the scientists who seek to study these unspoiled objects?

Be smart: Bezos admits his generation and even the one after won’t see those big dreams realized, but he believes Blue Origin can help entrepreneurs establish off-Earth industries.

He thinks Blue Origin’s rocket reusability and design architecture could help slash the cost of launching payloads to orbit.
Blue Origin’s newly announced Blue Moon lander — which could help NASA return astronauts to the moon by 2024 — is expected to use resources from the moon to make rocket fuel some day, Bezos said.

The intrigue: Bezos’ Utopian vision is starkly different than Elon Musk’s somewhat irreverent ideas that include artists circling the moon and pizza places on Mars.

The Amazon billionaire isn’t focused on Mars, instead opting for the grander vision afforded by the abundant resources we could theoretically have access to in space.
Other space leaders also envision large off-Earth settlements. United Launch Alliance CEO Tory Bruno imagines that 1,000 people could be living in space — perhaps even on the moon — as soon as the 2030s, according to Florida Today.

Bezos’ vision is light on the specifics. Building even one O’Neill colony would likely cost billions, if not trillions, of dollars, and even Bezos admits it’s still unclear exactly how it might work.

“That’s for future generations to figure out the details,” he said.

While Bezos is talking about the space civilizations of the future, Blue Origin is wading through the political mud, fighting for government contracts.

The company is now trying to secure a spot as one of the Air Force’s launch providers through the mid-2020s.
Blue Origin wants the Air Force to pick three launch providers, but at the moment the government is planning to pick just two, heavily favoring SpaceX and ULA — both already fly Air Force missions.
The 25 satellite launches expected within that time frame could bring billions of dollars to whichever companies are selected as providers.

The backdrop: Bezos has said that he sells about $1 billion in Amazon stock each year to help fund Blue Origin, but the company will need to continue to find many more sources of income if it hopes to become more than Bezos’ side hustle.

“Blue Origin is not a not-for-profit,” an industry source told Axios. “They want to see themselves as a major transporter to space.”

Even as Jeff Bezos laid out his grand vision for the future of humanity in orbit, it boiled down to a shiny pitch to NASA.

Blue Origin is courting government money with its Blue Moon lander plan to get NASA astronauts back to the lunar surface by 2024.
While  Jeff Bezos has butted heads with President Trump in the past, he went so far as to praise the administration, saying the moon mission is “the right thing to do.”

The Moon is cooling, shrinking and stretching, causing “moonquakes” that shake the lunar surface, according to a new study in the journal Nature Geoscience.

The big picture: The research paints a picture of the Moon as a dynamic object, not the dead rock we’ve imagined it to be in the past. The findings could also have implications for our understanding of how other relatively small, rocky bodies in the solar system evolve over time.

A couple of well-placed satellites in orbit above Earth could capture an incredibly detailed photo of the black hole at the center of our galaxy, scientists say in a new study in the journal Astronomy & Astrophysics.

Why it matters: If scientists can capture better photos of black holes, they might be able to push Einstein’s theory of general relativity closer to its limits.

Prior to the 1950s, there was no uniform way to name hurricanes. Some used saints’ names, others used longitude and latitude. In 1953, that all changed when the United States started using female names to identify storms. By 1979, the use of female and male names was adopted for storms in the Northern Pacific Ocean, Atlantic Ocean and Gulf of Mexico.

Why it matters: Naming hurricanes stemmed from the need to make communication about such destructive storms more salient and less confusing, especially if two storms were happening at the same time.
hurricanes.

The first stars born just millions of years after the Big Bang are thought to have been massive, bright balls of helium and hydrogen, with heavy elements like carbon, zinc and iron forming in their cores.

Driving the news: A new study published in the Astrophysical Journal details how these stars died, seeding the universe with elements that eventually gave rise to our sun, planets, other stars and more.