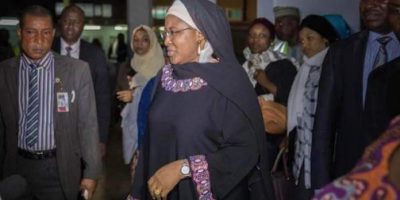 Wife of the President, Mrs. Aisha Buhari, has returned to London, United Kingdom where her husband, President Muhammadu Buhari, has been receiving medical attention since May 7.

Our correspondent learnt that Mrs. Buhari returned to the British capital on Sunday, barely three days after she arrived Nigeria.

She returned to Nigeria last Thursday from London where she has been since July 4, and proceeded to Owerri, Imo State capital, where she attended the annual August Meeting organised by the wife of the state governor, Nkechi Okorocha.

The Director of Information to the Wife of the President, Suleiman Haruna, could not be reached on the telephone as of the time of filing this report.
No statement has also been issued on her latest trip at press time, unlike what was obtainable in her previous trips to London.

The Sunday trip was the third time Mrs. Buhari would be visiting her ailing husband since he left Nigeria for his second medical vacation.
Then, Haruna had announced her second trip in a statement made available to journalists on July 2.

The July 2 statement had read, Wife of the President, Mrs. Aisha Muhammadu Buhari, left for London, United Kingdom on Sunday, July 2, 2017, to visit her husband who is on medical vacation.
She will convey to the President the best wishes of Nigerians and their fervent prayers for his quick recovery.

She is expected to stop over at Addis Ababa, to make a symbolic appearance at the meeting of the Organisation of African First Ladies against HIV/AIDS on Monday, July 3, 2017.

She will join other members to celebrate the 15th anniversary of the organisation, and use the opportunity to reiterate the voting rights of Nigeria in the upcoming elections of the organisation.
She will continue her journey to the United Kingdom on Tuesday, July 4, 2017.
The first time Mrs. Aisha Buhari traveled to meet her husband was on May 30.
She returned to the country in the early hours of June 6 after spending one week in London.

The President’s wife, on arrival at the Nnamdi Azikwe International Airport, Abuja, conveyed the President’s appreciation to Nigerians for their constant prayers.
She said Buhari would soon return to join Nigerians as, according to her, he was recuperating fast.

Mrs. Aisha Buhari had also called on Nigerians to continue to be strong in the face of challenges and to support the Federal Government in implementing the agenda for which the present administration was elected.

Mr. President thanked the acting President, Prof. Yemi Osinbajo, for his loyalty and called on Nigerians to continue to support the acting President in his effort to actualise the mandate of the All Progressives Congress, Mrs. Aisha Buhari was further quoted as saying on her arrival during the first trip.