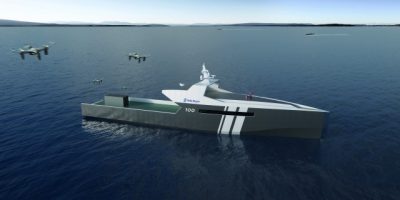 Autonomous ships could cut lives lost at sea, but is it safe to give AI access to the navy?

Not content with it’s tech-filled Phantom, Rolls-Royce has announced it has plans to make a 60-metre-long truly autonomous navy ship.

Packed with sophisticated sensors, artificial intelligence and advanced propulsion technology, Rolls-Royce aims to sell to the world’s military forces. It’s set to have a range of 3,500 nautical miles (which is over 4,000 regular miles) and operate without human help for over 100 days.

The ship, revealed by Rolls-Royce on Tuesday, is designed to tackle navy jobs around patrolling routes and to undertake surveillance tasks. Rolls-Royce also says it could take on fleet watch or sea mine detection duties, with supplementary drones able to assist in more complex missions.

There was no mention of using the ship for naval combat, and that’s probably okay. I don’t know if I fancy the idea of giving an AI-controlled ship a gun. Thankfully, Rolls-Royce agrees with me, explaining that it’s already conducting significant analysis of potential cyber risks to ensure end-to-end security so its AI doesn’t get hacked and go rogue.

Rolls-Royce is seeing interest from major navies in autonomous, rather than remote controlled, ships,” said Benjamin Thorp, Rolls-Royce general manager of naval electronics, automation and control. “Such ships offer a way to deliver increased operational capability, reduce the risk to crew and cut both operating and build costs.”

Interestingly, for an autonomous vehicle, Rolls-Royce’s naval ship will be powered by a gas or diesel engine. There are solar panels on the ship, but they’re simply there to harness energy for standby power usage.

Currently, there’s no concrete release set for the naval ship, but Rolls-Royce did say it expects to see the introduction of medium-sized unmanned platforms, particularly in leading navies within the next ten years.

Only last month we heard that a private military technology development company had created a drone that could wield a gun. Combine that with the Rolls-Royce ship and we could be well on the way to having a truly autonomous military force over the next decade.

It’s debatable if this is a good thing or a bad thing, but we’ve all seen  unless your name is Alan Martin how The Terminator starts.