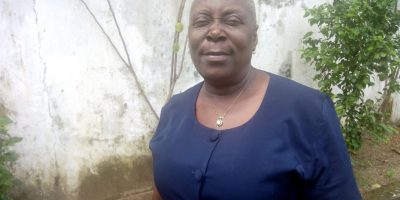 Retired banker Madam Cecilia poses with IB banking staff during retirement honoring. I have what I built, not what was built for me.

The Executive Director of the Central Bank (CBL), Milton Weeks, recently informed Senate plenary that out of the L$12.7 billion that was circulated within the country by the bank last year, surprisingly, only L$1.5 billion has circulated back into the bank; so where is the rest of the money.

Governor Weeks also added that the CBL has about L$10.9 billion that is outside of the bank’s operations, which can only mean that the rest of the money is being hidden within households, mattresses and the creases of a susu ma or pa’s lappa or pants seam.

Madam Cecelia Kolatee Browne started her banking career with the Meridian Bank Liberia limited as a bank teller in February 1990, just months before the Liberian civil war reached Monrovia. A few weeks ago, she was retired with honor for her 27 years of hard work, dedication and banking genius as a vault custodian and teller.

Some systems she put in place, including early Morning Prayer before operating hours, continue to be practiced in the banking sector today. We don’t know which customers we will meet that day. I worked closely together with my colleagues in making sure everything was okay, helped them if they needed help and showed them how to save, she added.

By the same token, in 2002, Madam Cecelia retired banker formed a better work space for tellers who withdrew loads of money that filled their work spaces every morning.

Before International Trust Company became IB Bank, I would go to tellers who had a bulk of money at a time, and I would withdraw the money from them and take it back to the vault, to make sure that cash didn’t stay outside and they end up with shortages. The boss liked my system so much, it was embedded into the system,she shared.

Through Madam Cecila’s intuition, tellers began saving and the word spread to local women known as susu ma’s, who receive L$50 commission per person who saves with them.

The susu ma has a couple of thousands hidden in her house and every Sunday she has a meeting with all of the people who have been saving to see who wants to eat their money that week.

I tell them to open bank accounts for each person. When they request for their money, give them deposit slips and let them fill it out. Give them a chance to save their money in a bank because all parties will benefit from the savings, she added.
Retired banker with IB banking staff during her retirement honoring program.

Madam Cecelia retired banker has learned that gone are the days women had to keep their money on them and report it to their husbands whenever they asked them to. Holding money to give to someone else to build them up is not good, but being able to hold money for yourself and having something to improve your life is important.

We as women need to learn from President Sirleaf. Her whole outlook was a period of knowing what to do with your money and learning how to manage, she added.

Women, she says, should understand that the bank is the safest place to save their money outside of their clean lappa, or hiding areas. Economically, the clear circulation of money within a system back to its people is a healthy banking system.

It is the safest and most profitable way to save money and get a percentage on top of it, she added. Presently, with my savings and the two lots of land I was able to purchase from a smart investment move, I am going to create a recreation hall where adolescents can come and think, be young and share ideas that will help their futures, she shared.

Meanwhile, Article 11 of the Constitution of Liberia guarantees fundamental rights and freedoms for all, irrespective of sex. In 1984, Liberia ratified the Convention on the elimination of all forms of discrimination against women (CEDAW).

But there is still more work to be done to expand financial inclusion among women and the poorest households, she added. Madam Cecelia remembers experiencing the war and never giving up her duty to manage her finances to support her family and pay their school fees.

She says that the incoming government will teach Liberians the essence of business and money and Liberian women should be ready by saving now and engaging in the development that is about to come. I sewed through the war, despite all the knowledge.

For three years when the war was intense, what I received has empowered me to be self reliant. I used my money on investment, purchased land, own a house and I am also into real estate. I have what I myself built, not what was built for me, she said.

How To Start A Real Estate Business With No Money

5 Steps About How To Buy Used car