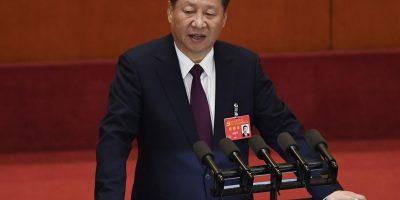 China has outlined its plans to become the world’s biggest global leader within the next 30 years.

Xi Jinping opened the five-yearly National Congress and set out his plan for the country to become a global leader by 2050.

Speaking in the Great Hall of the People for 3-and-a-half-hours, the President laid out his vision for the Communist ruling party.
He said it was time for China to become a mighty force that would lead the world on political, economic, military and environmental issues.

This is a new historic juncture in China’s development, he added.

The Chinese nation has stood up, grown rich, and become strong  and it now embraces the brilliant prospects of rejuvenation. It will be an era that sees China moving closer to centre stage and making greater contributions to mankind.

Mr Xi said China was “a great nation”, adding: it has been through hardships and adversity but remains indomitable.
“The Chinese people are a great people; they are industrious and brave and they never pause in pursuit of progress.”

Mr Xi became the chairman of the Communist party and therefore the leader of the nation in 2012.

Since Donald Trump has taken office, Mr Xi has sought to portray himself as a statesman and demonstrate that China is a responsible global leader.