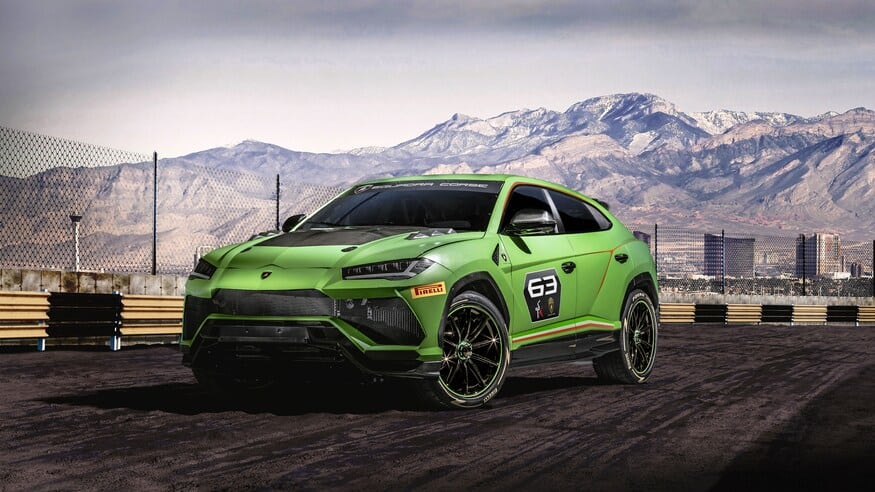 Yes, the large and heavy SUV has been transformed into a race car.

If a Hummer H1 can be a race car, then we shouldn’t be surprised the Lamborghini Urus st-x will be getting a dedicated single-brand series next year. First previewed by Lamborghini Urus Squadra Corse nearly a year ago, the ST-X is back in new images as part of a preview event organized this weekend in Spain on the occasion of the Super Trofeo World Finals. At the same event, the company’s motorsport division also previewed a new Aventador-based hypercar with 830 horsepower and crazy aero it will unleash in 2020.

We should point out the ST-X will be more than just a Lamborghini Urus with a racing livery as the SUV is going to through massive hardware changes to lose about a quarter of weight compared to the road car. In other words, it’s estimated to lose about 550 kilograms (1,212 pounds) and bring the curb weight down to 1,650 kg (3,637 lbs).

The significant diet will be achieved by making extensive use of carbon fiber, including for the hood and rear wing. Other changes compared to the standard Urus will include extra air intakes in the hood and a racing exhaust ending with new hexagonal tips underneath the corners of the rear bumper. “The first Super SUV in the world of racing” will be equipped with a twin-turbo 4.0-liter V8 engine delivering 650 horsepower and 850 Newton-meters (627 pound-feet) of torque inherited from the road-going Urus.

Much like Squadra Corse uses the Verde Mantis paint scheme for its Huracan race cars, the ST-X will also be finished in the striking green shade contrasted by red accents. It will ride on 21-inch center-lock wheels made from aluminum and wrapped in Pirelli tires. Images of the interior have not been provided, but Lamborghini says the race-ready SUV will feature a reinforced cockpit benefitting from a steel tubular roll bar, racing seats, and a fire extinguisher in case something goes wrong.

We’re going to see the Lamborghini Urus ST-X in action next year during the Super Trofeo 2020 World Finals in Misano Adriatico in Italy.