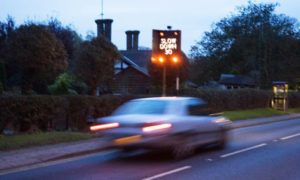 All new UK cars sold in the UK and Europe are to be fitted with devices to automatically stop drivers from exceeding the speed limit under sweeping changes to vehicle safety rules provisionally agreed by the EU.

The speed limiters is one of a range of safety features to be made mandatory from 2022, along with automated emergency braking, electronic data recorders and improved visibility built into lorries for drivers to see vulnerable cyclists and pedestrians around the vehicle.

Safety campaigners described the move as one of the biggest leaps forward in 50 years and said it could save 25,000 lives by 2037.

The package of measures needs to be ratified by the European parliament, which is likely by September. Although Britain may no longer be part of the EU when the rules come into effect, the UK cars regulator, the Vehicle Certification Agency, has said it will mirror safety standards for vehicles in the UK.

The speed limiter device, called intelligent speed assistance, or ISA, uses GPS data and sign recognition cameras to detect speed limits where the car is traveling, and then will sound a warning and automatically slow down the vehicle if it is exceeding the limit.

However, drivers will be able to override the device simply by pushing hard on the accelerator, reassuring some motoring groups that have argued that in certain situations  such as when trying to swiftly overtake a vehicle in front  speeding up could be safer.

The AA’s president, Edmund King, has said the case is not clear that ISAs will improve safety, although he welcomed plans to make automated emergency braking mandatory.

Antonio Avenoso, executive director of the European Transport Safety Council, said: There have only been a handful of moments in the last 50 years which could be described as big leaps forward for road safety in Europe.

The mandatory introduction of the seat belt was one, and the first EU minimum crash safety standards, agreed in 1998 was another.

If last night’s agreement is given the formal green light, it will represent another of those moments, preventing 25,000 deaths within 15 years of coming into force.

Volvo recently became the first manufacturer to announce it would limit the speed of all its new cars, albeit to 112mph  above the speed limit everywhere bar German autobahns.

Other measures agreed by the EU include making data recorders mandatory to help investigate vehicle crashes and assist research into increased safety.

Another feature already standard in many new cars, a lane departure warning system, will become obligatory.

The road safety charity Brake called it a landmark day. Joshua Harris, director of campaigns for Brake, said: These lifesaving measures come at a vital time, with road safety in a concerning period of stagnation with more than 70 people still being killed or seriously injured on British roads every day.

The government must commit to adopting these lifesaving regulations, no matter what happens with Brexit.

The UK cars has one of the lowest rates of road deaths among European nations, although the number of accidents has plateaued this decade, after a long trend of improving safety.

In 2017, 322 people died on British roads when the vehicle was either exceeding the speed limit or judged to be traveling too fast for the conditions.

A Department for Transport spokesman said: We continuously work with partners across the globe to improve the safety standards of all vehicles. These interventions are expected to deliver a step-change in road safety across Europe, including the UK.