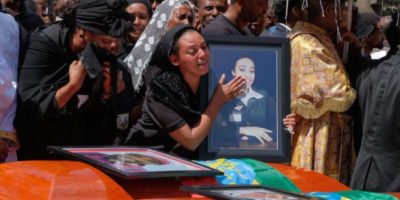 Boeing Charged Extra Money for ‘Vital’ Safety Features on 737 Max Boeing makes extra money selling planes around the world. But if you want all the bells and whistles that help ensure those planes don’t fall out of the sky, that sometimes costs extra money.

At least that’s the conclusion that some experts are coming to as investigations continue into what caused two plane crashes in Indonesia and Ethiopia in the past five months.

Both flights were the new Boeing 737 Max-8 model planes and both aircraft lacked safety features that are sold as extras by Boeing, like a special light that notifies pilots when software on the plane may be getting a false reading.

The New York Times has a new report this morning quoting experts about the safety features and notes that the Federal Aviation Administration (FAA) doesn’t require the features to be deemed airworthy.

They’re critical, and cost almost nothing for the airlines to install, Bjorn Fehrm, an analyst with the aviation firm Leeham, told the Times. Boeing charges for them because it can. But they’re vital for safety.

As the Times notes, the two safety features at issue are the angle of attack sensor and a disagree light.

Ethiopian Airlines flight 302 crashed and killed 157 people shortly after take off on 10th March, while Lion Air flight 610 crashed off the coast of Indonesia on October 29, 2018, and killed all 189 on board.

The assumed similarity of the crashes, based on ongoing analysis by investigators, caused countries to ground the 737 Max all around the world.

Boeing has promised that it’s working on the problem, which investigators believe may be the result of malfunctioning software and a failure to properly train pilots on the plane’s systems.

Software on the Boeing 737 Max measures the angle of the plane and automatically tries to correct the aircraft when it believes that the nose is pointed too high, which might cause the plane to stall.

The system, called the Maneuvering Characteristics Augmentation System (MCAS), may have gotten a false reading in both crashes, but without the optional disagree light to indicate that different sensors may be picking up different readings, the pilots might not have known what was going on.

In a statement to Gizmodo earlier this month, Boeing acknowledged that it had made updates to the MCAS in its new planes, but that it was designed to make an already safe aircraft even safer.

Gizmodo reached out to Boeing for further comment but did not immediately get a response. We’ll update this article when we hear back.

Aviation-focused news website the Air Current was perhaps the first to point out back on March 12, just two days after the crash in Ethiopia on the morning of March 10, that the safety features were part of an optional package on the doomed flights:

A warning light that would’ve alerted the crew to the disagreement wasn’t part of the added-cost optional package of the equipment on Lion Air’s 737 Max boeing aircraft.

A guardrail wasn’t in place. Once the aircraft was airborne, the erroneous Angle of Attack data collided with an apparently unprepared crew with tragic consequences as the MCAS system repeatedly activated, driving the jet’s nose into a fatal dive.

The exact price of the safety features is unknown, but what is known is that Boeing makes a pretty penny from these add ons, potentially accounting for around 5 percent of the final price of the aircraft, based on data extrapolated from a 2013 report by consulting firm Jackson Square Aviation.

What’s also known is that lower-cost airlines like Ethiopian and Indonesia’s Lion Air may be less likely to purchase the add ons.

U.S.-based carriers like Southwest and American purchased the particular safety upgrades at issue for their 737 Max planes, according to the Times. United Airlines did not.