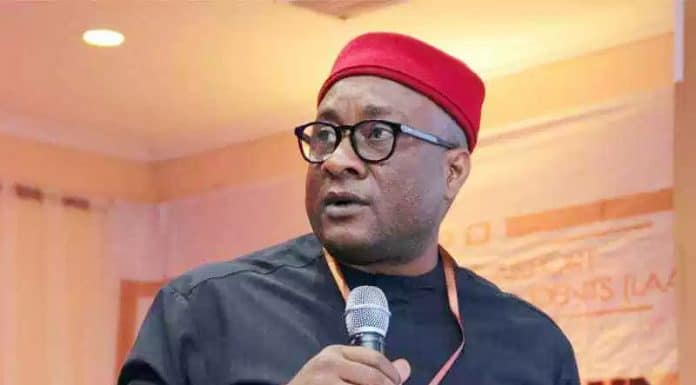 Members of the House of Representatives have collectively nominated the Chairman, Air Peace, Mr. Allen Onyema, for national honours in appreciation of his kind gesture of evacuating troubled Nigerians out of South Africa in the wake of xenophobic attacks on them by South Africans.

Onyema, who appeared before the House of Representatives in recognition of the free services offered by Air peace his airline to get Nigerians under xenophobic attacks in South Africa out of the country, received standing ovation and commendations from the federal lawmakers.
Onyema’s airline  Air peace has airlifted several Nigerians out of South Africa since the killings of Nigerians started in that country.
Chairman, House of Representatives Committee on Army, Hon. Abdulrazak Namdas, who moved the motion for national honour for the Nigerian aviation industry mogul said honouring Onyema will serve as a morale booster for other Nigerians to work in the interest of the country.
According to Namdas, “In view of what a good number have said here and the good works of Barrister Onyema, I want to suggest that the National Assembly, do recommend to Mr. President for a national honour for this great Nigerian.
I want to recommend that because Nigerians have been given names. If you go out of the shores of this country, you will realise that a lot of people look at us differently; today, his action has contributed to rewriting the history.
“I have not come up with a formal motion but with your kind permission that I want to move this motion here to recommend for the award of this great Nigerian so that it can also boost the morale of other Nigerians, including ourselves, so that we can do good for Nigeria.”
When the motion was put to voice vote, the lawmakers unanimously approved the recommendation.
Describing the recognition given Onyema as “one of our epic moments in the chamber…for us to recognise Nigerians who have risen to the call of patriotic duty,” the Speaker, House of Representatives, Hon. Femi Gbajabiamila, said the honour being done to Onyema the chairman of Air peace airline was in recognition of his selfless service to Nigeria and Nigerians by the evacuation of citizens faced with the danger of xenophobic attacks in South Africa.
“Yesterday, the House moved for the admittance into the chamber in a very rare case – hardly do we entertain or invite people into the chamber; but yesterday, unanimously.
We moved for the admission into chamber, in recognition of his selfless and patriotic service to our country and to our brothers and sisters in South Africa, Mr Allen Onyema, Chairman and Managing Director of Air Peace airline.
I believe that we are all witness to what he has done for our brothers and sisters in the last couple of weeks.
We have seen the scenes of Nigerians on TV being reunited with their families and friends; the emotional scenes brought about or made possible by only one man among many men; a businessman who is into business like every other businessman to make money, but who sacrificed his business, and at no cost – and I dare say at a loss – deploy his aircraft to bring back our  brothers and sisters who were facing imminent danger in South Africa.
“This, we thought, was a feat that should be commended. And we hereby commend Mr Allen Onyema the Chairman of air peace and recommend him to the Federal Government for higher honours in Nigeria,” Gbajabiamila stated.
Noting that he never experienced such honour done him by the lawmakers, Onyema reinstated his commitment to continue to get Nigerians out of South Africa.
He said: “I want to tell you that Air Peace is ready to repatriate Nigerians. We are ready to go into South Africa as long as there is one single Nigerian remaining in that country to be evacuated and we are doing it free of charge because money is not everything.”
Onyema stated that “The kind of support we have gotten from Nigerians through your commendations and everything gladen our heart to the extend that my pilot and my cabin crew stood out there for 24 hours because they were (South African authority) trying to frustrate us. They didn’t want us to evacuate.
They pleaded with the Nigerian High Commission not to do it, but they told them that they can’t stop this private citizens.
“Those cabin crew stood up for 24 hours  and they delayed us for 15 hours before allowing us to do the first evacuation.”
Charging Nigerians to learn from the unity of purpose that emanated from the xenophobic attacks on Nigerians, the aviation boss said:
“In the last one week, this country has bonded, in the last one week this nation has bonded. No more Hausa, no more Yoruba, no more Igbo.
“Let me use this opportunity to plead with all of you here, the representatives of our people, as long as we fight against each other, soon enough shall we not have a nation.
It is only when we start fighting for each other as against what is happening now can we have a nation. I believe in nationalism as against sectionalism.
“If you encounter a Nigerian, the first thing he says is I’m Hausa, I’m Igbo, I’m this. This country is blessed with 370 ethnic nationalities, not 250 that made up this country, that is a recipe for strength. Can we decide this day to annex this strength in diversity?”
Source:News Now.