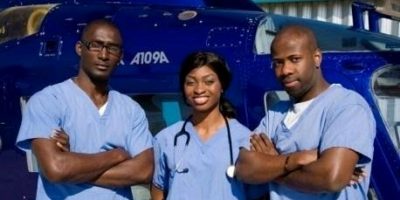 *Dumps highly paying job in England to relocate to Nigeria, Flying Doctors have 20 aircraft and 44 doctors that can deliver care to any of Nigeria’s hospitals
*Prompted to set up Capital Intensive and delicate business through the death of her younger sister of sickle cell Anaemia
* Flying doctors came alive two years ago, provides critical care transportation solutions to both the private and public sector by selling yearly air ambulance cover plans to states, companies and individuals.

* We are completely physician-led and adhere to the highest standards of medical practice supported by the East Anglian Air Ambulance in the United Kingdom. Our mission is simple to provide the best possible standard of health care to all.

The first time an air ambulance service was suggested for Nigeria was in 1960 and nothing was done about that idea-Dr Orekunrin.
*Member: American Academy of Aesthetic Surgeons and British Medical Association

THERE ARE MANY NIGERIANS that are quietly doing Nigeria proud in their chosen careers across the world, thereby re-branding the nation in their capacity.

Olamide Orekunrin, a graduate of Medicine from the University of York and Hull York Medical School is one of these rare Nigerians in the Diaspora who at the age of 21, becomes youngest qualified medical doctors in the United Kingdom.

Ola, which translates. Wealth in Yoruba language had been determined to succeed right from her college days in Hull York Medical School. After graduation, Olamide  Orekunrin worked for ten years with the National Health Service, United Kingdom.

Now 28 years old, Olamide Orekunrin who was born in London, England and grew up under the care of foster parents was motivated to start the charity after experiencing the loss of her sister under difficult circumstances and to improve medical services in the Nigeria.

Undaunted by difficult challenges, she successfully established Flying Doctors in Lagos, Nigeria since 2007 as the Chief Executive officer.

This highly celebrated Nigerian is an active member of both the American Academy of Aesthetic Surgeons and the British Medical Association. She was listed among Young Global leaders by World Economic Forum in 2013. She has lectured on entrepreneurship at Massachusetts Institute of Technology.

For the records, Flying Doctors have 20 aircraft and 44 doctors who can deliver care en route to one of Nigeria’s hospitals. The company hire out their services to major events in Nigeria as well as offering insurance to wealthy companies and families in the country.

Olamide Orekunrin believes that improvements in her country’s position in the world will result from the action of entrepreneurs and not the government.

Olamide’s inspirational story is full of innovation, success and excellence. It started with a resignation from a high-flying job in England, and relocation to Nigeria. So determined to make a difference in medical practice, Olamide Orekunri opted to set up, The flying doctors, the first air ambulance service in West Africa.

Her journey to setting up such a capital intensive and delicate business was prompted by a death, her younger sister died of sickle cell anaemia. Her words: She was always in and out of hospitals but eventually died for lack of the availability of air ambulance.

This more or less propelled my interest in medicine because i really wanted to make a difference in the same way doctors had done to her. Setting up the company was a direct result of my fascination for helicopters, trauma medicine, motor accident kinematics and pre-hospital medicine. I knew it was something that I had the skills and experience to do.

The flying doctors eventually came to fruition about two years ago and it basically provides critical care transportation solutions to both the private and public sector by selling yearly air ambulance cover plans to states, companies and individuals.

Regarding her company, Olamide Orekunrin reportedly said:The first time an air ambulance service was suggested for Nigeria was in 1960 and nothing was done about that idea. Having studied the models in Kenya, Libya, Uganda and India, coupled with my growing passion to help improve the health care system in Nigeria, which I believe is poor, I became even more determined to bring a similar service to Nigeria.

We are completely physician-led and adhere to the highest standards of medical practice supported by the East Anglian Air Ambulance in the United Kingdom. Our mission is simple to provide the best possible standard of health care to all.

How would low income earners benefit from such high end service, She answers by saying: What I do hope is that more states will take up cover as well as making it increasingly available to the common man. I know that as Nigeria starts to take health care reform more seriously, this will begin to happen.

This beautiful lady with a family lineage to Ekiti State reveals: I quit my job, said goodbye to my political aspirations for the position of the president of the British Medical Association and minister for the conservative party, I sold my car and my house, and bought my one way ticket to Lagos. I was rejected more times than I can remember.

Sometimes I would spend hours waiting in an office only to be told to come back the next day and then be turned down. One time, on my way to Ondo State, I was robbed of all I had and was told by my companion, who was travelling with me, not to speak or else my accent would give me away and be the basis for my kidnap. Even in the face of difficultly, I was able to get some funding in addition to what I had saved up.

In all of these, I was able to learn a great lesson. when you need something, people tend to avoid you but when you don’t need anything and seem to be making profit, they tend to become your best friend. The attitude towards me has changed immensely.

Of her love for Nigeria, Olamide explains: I really do love Africa and Nigeria in particular because it is my identity. I have since realised that the earlier I re-integrate myself back to my roots, the better for me. I grew up in all-white environment and went to an all-white university. To be honest, until I moved back to Lagos, I never ever thought that Nigerians were capable of doing or achieving anything on their own.

Reminiscing on her childhood: I grew up in a seaside town called Lowestoft in the east of rural England, a completely white community. I went to a primary school run by Catholic nuns and was raised by foster white parents. We didn’t have much money even though it was a working class family and we sometimes struggled to make ends meet.

Against all odds, I passed my A-Levels with flying colours, started my degree at the University of York at 15. I supported myself all through, working. I wrote my final medical examinations at 21, thus emerging the youngest medical doctor in England.

She admits that her foster mother, Doreen, has significantly shaped her life, She’s a great, spiritual wise woman, who taught me so many valuable skills. I still think over some of the things that she told me when I was a child. They are all finally beginning to make sense to me now.

Olamide  was one of the many recipients at the 2012 ThisDAY Newsspaper award. This is one of other numerous awards she has received for her work in research and clinical evidence, i used to think people who win these kinds of awards were politicians or people with the right pedigree so it came as a shock to me. I feel really humbled and overwhelmed and it will simply propel me to do more.

Of her style, she reportedly adds: very casual, fresh and classy. I wear things that I think are reasonably stylish. I am not one to experiment with colours.