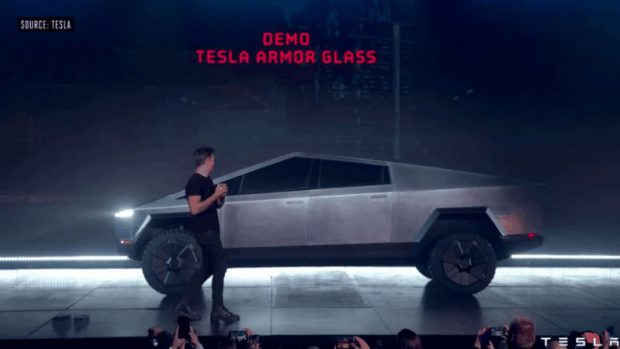 Building the future is hard. And nowhere was that more evident than at Tesla’s grand unveiling of the Cybertruck in Los Angeles last night. But if anyone can do it, Elon Musk can, right.

Unconventional design choices aside, the Tesla presentation had some really embarrassing gaffes, like when Tesla’s lead designer, Franz von Holzhausen, attempted to show off the vehicle’s “armoured glass,” and it resulted in two very broken windows. The demonstration didn’t instil confidence that Musk could deliver this all-electric vehicle anytime soon. In fact, Musk says it won’t be ready until “late 2021.” Which leads us to a rather sensitive question: What will happen first, the release of the Cybertruck or the release of a flying car.

Strangely enough, Tesla’s Cybertruck is supposed to be exactly two years away as well. And it’s fair to ask whether we’ll see this Cybertruck on the road before we see flying cars zipping across the sky like our 1960s pal George Jetson.

“Trucks have been the same for a very long time,” Musk said at the event in Los Angeles yesterday. “We wanted to show you something different… and we need sustainable energy now.”

According to Musk, the most inexpensive version of the Cybertruck will cost $39,900 (£31,087), will tow up to 14,000 pounds, and will be able to carry a 3,500-pound payload in its bed. The Cybertruck will also come in three different ranges: 200 miles, 300 miles, and 500 miles. All of those specs are ambitious, to say the least, but delivering on that is about a thousand times easier than delivering a flying car, as countless failed companies of the past century can attest.

Electric vehicles actually exist in the real world, and people pay real money for them. But there’s still reason to be a bit sceptical when it comes to Musk’s claims. The guy has some major successes in the world of tech innovation, especially when the US government is footing the bill, as it often does for SpaceX and Tesla. But Musk is also known to spread himself really thin and get easily distracted. The Model S and Model X faced delays of 18 months and more, SpaceX’s Falcon 9 explosion in 2016 destroyed a $200 million (£156 million) satellite, and Tesla’s Autopilot feature has been implicated in a number of deaths.

But maybe comparing the arrival of the Cybertruck to the flying car isn’t even the proper way to look at it. As Musk said (facetiously or not) on Twitter yesterday, a pressurised version of the Cybertruck is supposed to be the “official truck of Mars.” Musk has said repeatedly that he’d like to die on Mars, presumably of old age, meaning that he’s only got a few decades left to get his arse to the Red Planet. Musk has also said that he’d like to land SpaceX’s Starship on Mars by 2022, sans human, of course. But reality seems to be sneaking up on Musk’s ambitions, with his Mk1 Starship blowing up during a pressurisation test just a couple of days ago. (SpaceX downplayed the incident, saying it was not a “serious setback.”)

It’d be great to see SpaceX land on Mars by 2022, but even if it does, the prospect of a manned mission is still quite a ways off.

Again, building the future is hard – not just because there are technological hurdles, but because there are political and market demand issues that make plenty of good tech ideas unfeasible. The Hyperloop isn’t that hard from a technological perspective. The hardest part, as I wrote when the concept was announced, is getting the permission to run a mass transit system through private property. You can even ask President Trump about that one, though he likes to just seize private land for his border wall and settle it later in court.

Does anyone actually want to drive a truck that looks like it was rendered in a Nintendo 64 Maybe! But there are plenty of other wildcards that could derail the Cybertruck, whether it’s government concerns over fires, as we’ve seen with other Tesla vehicles, or consumer worries about those “bulletproof” windows.

For whatever it’s worth, predictions about futuristic tech have generally gotten more conservative in 2019. The CEO of Uber, Dara Khosrowshahi, now acknowledges that self-driving cars are perhaps “three to five years” out, which is much farther down the road than he and other tech execs were saying a few short years ago. And you’re even hearing from flying car companies that their products are now “three to five years” away, when “two years” has been the norm for the 21 century.

Will the Cybertruck arrive by 2021. Only time will tell. But let’s just say that we’ll believe it when we see cars fly.