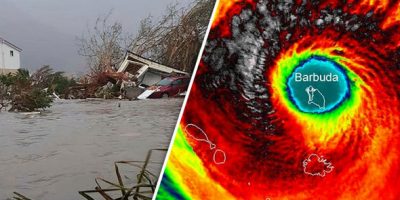 Nearly every building was damaged when the hurricane passed almost directly over the Caribbean island. About 60% of the island?s roughly 1,400 people were left homeless, said the Antigua and Barbuda prime minister, Gaston Browne

The tiny Caribbean island of Barbuda has been devastated by?Hurricane Irma, the most powerful Atlantic Ocean storm recorded in history.

Around 90% of the nation?s structures and vehicles have been destroyed, killing at least one person, Barbuda Prime Minister Gaston Browne said.

Irma passed over Barbuda early on Wednesday as a Category 5 hurricane.

The storm has left a trail of destruction?across the eastern Caribbean, leaving at least eight?people dead in total.

“I’m of the view that as it stands now Barbuda is barely habitable,” Gaston Brown, the Prime Minister of Antigua and Barbuda told ABS Television/Radio.

Brown estimated that 95% of the homes on the island had sustained some form of damage from the Hurricane, a level of destruction he deemed “unprecedented.” The cost of reparations, he estimated, could be as high as $150 million.

“It is just a total devastation” he said. “Barbuda right now is literally a rubble. We have to raise a significant amount of resources now to rebuild Barbuda and to restore it to normalcy.”

Although Irma only struck the island this week, another storm, Hurricane Jose, is threatening further disruption to the region. Jose is expected to develop into a hurricane this coming weekend, but its path is still unclear,?according to the Weather Channel.

“If we have yet another storm coming in a matter of days we will have to make special arrangements to evacuate all of Barbuda and bring them over here [to Antigua] until we can restore some level of normalcy,” he said.

Around 60% of Barbuda?s 1,600 residents have been left homeless, Mr Browne said.

A two-year-old child was killed as a family tried to escape a damaged home during the storm.

Barbuda is situated between the Atlantic Ocean and the Caribbean Sea and forms part of the state of Antigua and Barbuda.

Mr Browne said Antigua – the largest of the two islands – had been spared the worst of Irma, but many private homes have been destroyed by the storm.

Another hurricane, Jose, has formed in the Atlantic, spreading fears it could head towards Caribbean islands already ravaged by Irma.

The US National Hurricane Center has said there is no immediate threat from Jose, which is currently far east of Irma, but meteorologists have warned the storm?s path could change.

Hurricane Jose is currently a category 1 hurricane with winds of 75mph.

Mr Browne said his government is considering moving the entire population of Barbuda to Antigua if Jose threatens the island.

Local officials warned the French part of the island St Martin has been 95% destroyed.

A state of emergency has been declared for Florida, the US Virgin Islands and Puerto Rico, where huge areas have been left without power.

Hurricane Irma Destroyed Nearly Every Building on the Island of Barbuda

Florida rushed to prepare for a possible direct hit on the Miami area by the Category 5 storm with potentially catastrophic 185 mph winds.

Nearly every building on the island of Barbuda was damaged when the eye of the storm passed almost directly overhead early Wednesday and about 60 percent of the island’s roughly 1,400 people were left homeless, Antigua and Barbuda Prime Minister Gaston Browne told The Associated Press.

“Either they were totally demolished or they would have lost their roof,” Browne said after returning to Antigua from a plane trip to the neighboring island. “It is just really a horrendous situation.”

He said roads and telecommunications systems were destroyed and recovery will take months, if not years. A 2-year-old child was killed as a family tried to escape a damaged home during the storm, Browne told the AP.

As the storm moved west, it tore up the small islands in its path. On St. Thomas, in the U.S. Virgin Islands, Laura Strickling spent 12 hours hunkered down with her husband and 1-year-old daughter in a boarded-up basement apartment with no power as the storm raged outside. They emerged to find the lush island in tatters, with many of their neighbors’ homes damaged and the once-dense vegetation largely gone.

“There are no leaves. It is crazy. One of the things we loved about St. Thomas is that it was so green. And it’s gone,” said Strickling, who moved to the island with her husband three years ago from Washington, D.C. “It will take years for this community to get back on its feet.”

Significant effects were also reported on St. Martin, an island split between French and Dutch control. Photos and video circulating on social media showed major damage to the airport in Philipsburg and the coastal village of Marigot heavily flooded. France sent emergency food and water rations there and to the French island of St. Bart’s, where Irma ripped off roofs and knocked out all electricity. Dutch marines who flew to St. Martin and two other Dutch islands hammered by Irma reported extensive damage but no deaths or injuries.

By late Wednesday, the center of the storm was about 85 miles (135 kilometers) north-northwest of San Juan, Puerto Rico, and heading west-northwest at 16 mph (26 kph).

More than half the island of Puerto Rico was without power and nearly 50,000 without water, the U.S. territory’s emergency management agency said. Fourteen hospitals were using generators after losing power, and trees and light poles were strewn across roads.

The tiny island of Culebra reported sustained winds of 88 mph and wind gusts of 110 mph.

The U.S. National Weather Service said Puerto Rico had not seen a hurricane of Irma’s magnitude since Hurricane San Felipe in 1928, which killed a total of 2,748 people in Guadeloupe, Puerto Rico and Florida.

Puerto Rico’s public power company has cut back on staff and maintenance amid a?decade-long economic crisis?and the agency’s director warned that some areas could be without power from four to six months because the infrastructure has already deteriorated so badly.

President Donald Trump this week approved an emergency declaration for the U.S. Virgin Islands and Puerto Rico. That means the Federal Emergency Management Agency and other agencies can remove debris and give other services that will largely be paid for by the U.S. government.

“No matter what precautions we take, the coastal flooding will impact oil tanks,” said Catherine McCabe, a regional administrator.

Another concern was the 20 Superfund sites in Puerto Rico and the three in the U.S. Virgin islands, given that most were near the coast, she said. She said EPA officials in New Jersey were on standby to fly down after the hurricane passed through.

State maintenance worker Juan Tosado said he was without power for three months after Hurricane Hugo killed dozens of people in Puerto Rico in 1989.

Tourist Pauline Jackson, a 59-year-old registered nurse from Tampa, Florida, puffed on her last cigarette as a San Juan hotel prepared to shutter its doors ahead of the storm.

“I’m in a hurricane here, and when I get home, I’ll be in the same hurricane. It’s crazy,” she said.

She tried to leave ahead of the storm but all flights were sold out, and she worried about her home in Tampa.

“When you’re from Florida, you understand a Category 5 hurricane,” said Jackson, who was scheduled to fly out Friday.

The U.S. National Hurricane Center said Irma’s winds would fluctuate, but the storm would likely remain at Category 4 or 5 for the next day or two as it roars past just to the north of the Dominican Republic and Haiti on Thursday, nears the Turks & Caicos and parts of the Bahamas by Thursday night and skirts Cuba on Friday night into Saturday. It will then likely head north toward Florida. Evacuations from high-risk areas were ordered throughout the path of the storm.

By early Sunday, Irma is expected to hit Florida, where Gov. Rick Scott said he planned to activate 7,000 National Guard soldiers by Friday and warned that Irma is “bigger, faster and stronger” than Hurricane Andrew. Andrew pummeled south Florida 25 years ago and wiped out entire neighborhoods with ferocious winds.

Trump also declared an emergency in Florida, and authorities in the Bahamas said they were evacuating six southern islands.

Experts worried that Irma could rake the entire Florida east coast from Miami to Jacksonville and then head into Savannah, Georgia, and the Carolinas, striking highly populated and developed areas.

“This could easily be the most costly storm in U.S. history, which is saying a lot considering what just happened two weeks ago,” said Brian McNoldy, a hurricane researcher at the University of Miami.

Because of the uncertainty in any forecast this far out, authorities in Miami held off for the time being on ordering any widespread evacuations. The mayor of Miami-Dade County activated the emergency operation center and urged residents to have three days’ worth of food and water.

The State Department authorized voluntary evacuation of U.S. diplomats and their families from the Dominican Republic, Haiti and Cuba.

Four other storms have had winds as strong in the overall Atlantic region, but they were in the Caribbean Sea or the Gulf of Mexico, which usually have warmer waters. Hurricane Allen hit 190 mph in 1980, while 2005’s Wilma, 1988’s Gilbert and a 1935 great Florida Keys storm all had 185 mph winds.

Bahamas Prime Minister Hubert Minnis said his government was evacuating six islands because authorities would not be able to help anyone caught in the “potentially catastrophic” wind, flooding and storm surge. People there would be flown to Nassau in what he called the largest storm evacuation in the country’s history.

The northern parts of the Dominican Republic and Haiti could see up to 10 inches (25 centimeters) of rain, with as much as 12 inches (30 centimeters) in the southeast Bahamas and Turks and Caicos.

The website cruisecritic.com said 28 cruises had been canceled, shortened or had their itineraries changed as a result of the hurricane.

Also Wednesday, Tropical Storm Katia formed in the Gulf of Mexico off Mexico’s coast and rapidly became a hurricane. It had sustained winds of 80 mph (130 kph) and Mexico’s government issued a hurricane watch for the coast of Veracruz state from Tuxpan to Laguna Verde. Katia was about 195 miles (315 kilometers) north-northeast of the city of Veracruz late Wednesday and was expected to drift toward the coast Thursday and Friday, the hurricane center said.

Another tropical storm farther east in the Atlantic became a hurricane Wednesday evening. Hurricane Jose posed no immediate threat to land but meteorologists warned the storm’s path could change. Jose’s sustained winds had risen to 85 mph (140 kph) by late Wednesday and some strengthening was expected.