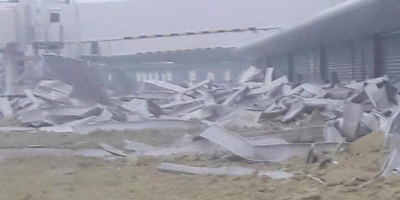 Hurricane Irma caused near total destruction of a large section of St. Martin as the Category 5 storm continues to make its way to Florida.

The early photos of some of the damage from Irma show flattened buildings, ripped up infrastructure, and flooded streets. Irma is expected to blast through the Caribbean Islands mid-week and slam parts of Florida by Friday and into early Saturday morning.

Forecasters expect Irma?s path to track with Hurricane Matthew?s in 2015, which did about?$10 billion worth of damage in Haiti, despite not making landfall inside the U.S.

Irma should begin hugging Florida?s eastern coast Saturday before heading north toward Georgia, according to a report from the?National Centers for Environmental Prediction?s model.

Local Florida officials urged citizens Tuesday to leave areas of the state that are expected to take the brunt of Hurricane Irma?s wrath.

?This hurricane is far too powerful, poses far too great a threat for us to delay actions any further,? Miami Dade County Mayor Carlos A. Gimenez?told reporters?at a news briefing ahead of Irma?s possible landfall.

Officials will likely begin asking the county?s nearly 2.7 million residents to begin evacuating by Wednesday, he added. Irma, which is currently classified as a Category 5 hurricane, is expected to roll over Puerto Rico Wednesday before arriving in Florida Saturday.