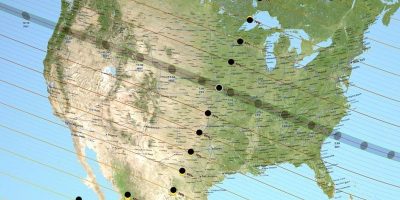 Total Solar Eclipse: What Is It And How To Watch It Live.

Live traffic camera in Oregon. Please watch before driving out to go see the solar eclipse.

What is Total Solar Eclipse?

The countdown is on for millions who are gearing up to watch a total solar eclipse sweep across America.

Around 9am local time tomorrow (11pm AEST), those standing on the coast of Oregon will see a small black spot appearing on one side of the sun before it grows to blanket the sun’s disc by about 10.15am.

For just under three minutes, total darkness will descend upon the state.

The rising sun is seen as a crescent over a cross in a graveyard on the Hohen Preissenberg, Bavaria, as it is partially hidden by the moon during a solar eclipse 31 May 2003. (Getty)

A total solar eclipse occurs when the moon passes between the sun and the earth, making the sun’s tenuous atmosphere – the corona – visible.

The sun’s diameter is 400 times wider than the moon but also 400 times further away.

When they line up perfectly, it appears as if the moon is totally obstructing the sun.

This event occurs every 12 to 18 months, with a total eclipse lasting up to two minutes and 40 seconds.

A map of the United States showing the path of totality for the August 21, 2017 total solar eclipse. (Image: NASA)Ray Cooper, volunteer for the Oregon Museum of Science and Industry, preps his equipment to provide live video of the eclipse. (AAP)

Tomorrow, the eclipse will sweep across the US, from Oregon in the west to South Carolina in the east.

About 12 million people living in its path will witness the event, donning glasses that prevent any eye damage from looking at the sun.

It’s going to be this huge social event for the United States, and I think it gives us something we can all enjoy  as one of the nation’s amazing spectacles, NASA astrophysicist Dean Pesnell said earlier this week.

The rest of the US will get a partial eclipse that extends into Canada and to the top of South America.

A photo provided by Oregon State Police shows the crowd at the Big Summit Eclipse 2017 event near Prineville in Oregon. (AAP)Colton Hammer tries out his new eclipse glasses he just bought from the Clark Planetarium in Salt Lake City. (AAP)

The total solar eclipse is the first to span the coast of the US since 1979, with the next Australian eclipse estimated to take place on December 4, 2021.

Scientists use solar eclipses as a chance to study the sun’s corona and make improvements in understanding how solar wind affects the Earth.

How can I watch it?

Sarah Mayes sells glasses to view the solar eclipse in Hollywood, California. (AAP)Hilary O’Hollaren, right, sits in the early morning sun as Rory O’Hollaren prepares breakfast as they camp near the state fairgrounds in preparation for the eclipse. (AAP)

Those in the southern hemisphere including Australians – won’t be treated to the darkening sun, with the eclipse only visible from North America and parts of South America, Africa and Europe.

Aussies can instead watch the eclipse as it happens online.

Numerous organisations,including NASA, will live stream the eclipse starting about 2am on Tuesday AEST (12pm on Monday local time).