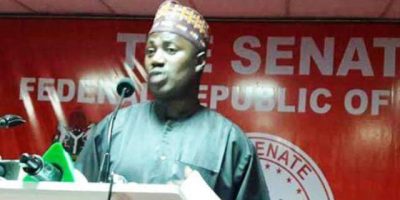 SENATE STANDS WITH BUHARI, TELLS PROTESTERS TO LEAVE HIM ALONE
The Senate Tuesday lashed out at civil society organisations (CSOs) protesting the prolonged medical vacation of President Muhammadu Buhari abroad, asking the protesters to leave the president alone as he had not violated any law.

It noted that Buhari, before his medical trip to the United Kingdom, fulfilled the constitutional requirement of informing the National Assembly of his vacation and transmitted power to the vice-president.
Some CSOs had in the past two days besieged Abuja, demanding that the president either resumes duty immediately or resigns his position.
The protest march, which was led by entertainment icon and activist, Mr. Charles Oputa (Charley Boy), however, took a new turn Tuesday as the police dispersed it, firing tear gas at the protesters that had gathered at their Unity Fountain, Abuja rendezvous.
The police explained later in the day that it disrupted the protest to forestall the breakdown of law and order.
The Senate in a reaction to the protest by its Chairman of Media and Publicity Committee, Senator Sabi Abdullahi, cautioned the protesters against overheating the polity with what it called their unreasonable demands, saying their actions were creating unnecessary tension in the country.
It said the protests could divert the attention of the federal government from its efforts at tackling the economic and security challenges facing the nation.
?The president has broken no law and therefore we do not see any justification for this diversion and noise making,? the Senate said, adding: ?The sponsors are merely seeking cheap publicity at the expense of the peace of Nigeria.?
It denied the claim of the protesters that the president?s absence had created a vacuum and disrupted the workings of government. ?We, in the National Assembly, are satisfied that there is no vacuum. The federal government is working. Acting President Yemi Osinbajo is providing the required leadership. So, there is no reason for the protests.? it said firmly.
According to the upper legislative chamber, ?All Nigerians now should focus on praying for the safe return of the president. We in the Senate are happy about the report by the governors and party leaders who recently visited President Buhari in London and we know he will soon return to continue to provide leadership to our people and the rest of Africa.
?We, therefore, call on the protesters to stop all these demonstrations and let their sense of patriotism overshadow the zeal for activism by joining other Nigerians to pray for the president, the acting president and Nigeria as a country at this critical period.?
But the protesters were swift in replying the Senate Tuesday, saying the position of the upper legislative chamber was an embarrassment to Nigerians, who were asking necessary questions on the whereabouts of their president.
The protesters under the aegis of #OurMumuDonDo said they would not back down from their request calling on the president to either resume or resign, despite the harassment by the police.
The leader of the group, Oputa, in a statement Tuesday said the Senate had failed in its constitutional responsibilities by not asking necessary questions on the health status of the president.
?I am disappointed in this country. But let it be known that no amount of intimidation on us by security agencies will deter us from demanding explanations from the government,? he said, adding: ?They must be accountable to Nigerians because they were elected into power by us, and it is on this basis that they will account for their actions. We are tired of the back and forth stories from the Presidency on Buhari?s whereabouts.?
Oputa stated: ?Also, to compound the mess Nigerians are in, it is disheartening for the Senate that ought to ask questions to be the very ones supporting such show of shame. Indeed, the feeling out here based on their position is that they are nothing but Buhari?s errand boys. I guess the Senate is desperate to please the president. They have failed Nigerians when most needed.?
He said the position of the Bukola Saraki-led Senate that the protesters should leave Buhari alone as he had violated no law was outright ridiculous.
?Saraki?s position,? he contended, ?is a desperate attempt to patronise the president.?
-Thisday