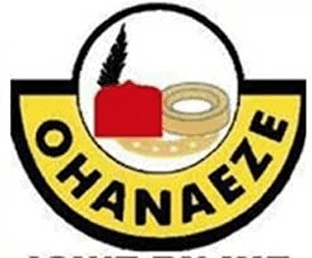 By Nwafor Sunday
Peeved by the statement of the national president of Miyetti Allah Kautel Hore, Abdullahi Bodejo, wherein he claimed that the bushes in the South East do not belong to Ohanaeze or to the five governors of the region, Ohanaeze Ndigbo Youth Council Worldwide, Sunday cautioned him, noting that the bushes are part of South East. ohanaeze ohanaeze The group equally warned Miyetti Allah not to taste its wrath, saying that any erring pastoralists caught up moving with cows from Community to Community from Monday 9/9/19, will taste the full Wrath of Igbo. The group also frowned at Bodejo’s comments on Ruga, describing it as misguided statements. Recall that Abdullahi Bodejo had in an interview with The Sun opined that “What South East Governors are doing show they are not good Nigerians. Good Nigerians are supposed to accept every Nigerian to do his business in any part of the country by whatever means of bringing the business there. We Fulani are not happy over the way some governors and the Ohanaeze in that region are reacting over the Fulani issues. “Once you are a governor, you begin to see everyone no matter the particular area he comes from as one. That area is everybody’s area whether Fulani, Tiv, Ijaw, Yoruba etc, it is part of Nigeria; Nigeria is one. “Let the governors and Ohanaeze stop pushing that position because it is not in the constitution of Nigeria, and it is annoying. They are not trying to unite people; they are trying to divide Nigeria by their acts. We have different associations in that area, and some are shouting to be seen as working for their people; maybe they are working for their people.  “Like the Fulani organisation, Miyetti Allah Kautal-Hore, we are always seeing how we can unite this country; we are not doing things to just protect only the Fulani interest, but we are doing things to protect the interest of this nation because Nigeria is one; Nigeria is our own and it is for everybody. “The bush doesn’t belong to them. If you are a governor or whatever they can call you, the bush has been there. If they claim that they are farming, they are not farming on every part of the bush. “For the Fulani, their business is inside the bush. The governor and the organisation don’t have any reason for that; if they did, let them open up or come up with the reason. They can’t say if they want to bring cows they must bring them in with vehicles. “Before the introduction of vehicles, the Fulani were moving with their cows and supplying their cows to any part of the country. From Taraba State, Fulani have been trekking with their cows to sell in Anambra, Port Harcourt, Ibadan, Uyo, etc. This is part of the culture of the Fulani.” Reacting, Mazi okechukwu Isiguzoro, President General of Ohanaeze Ndigbo Youth Council Worldwide said ‘no going back on ban against Fulani’s who bring cattle on foot and no land would be carved out for the Fulanis’. Rea the full statement below: “We wish to categorically state, that Fulani tribe is one of the few minorities ethnic groups in Nigeria, irrespective of their dominance over some ethnic groups in the North. Igbo are found in all the clans across 774 LGAs of Nigeria, and a future credible census will put to an end to the bogus claims of Abdullahi Bodejo. With Igbo all over Nigeria, we have never demanded lands from host Governors outside South East or use threats and hate speeches to acquire lands for our Businesses. “Rearing of cattle remains a private business and should adhere to the strict rules of South East Governors on the ban of pastoralists movement of cattle by foot. “We wish to remind Miyetti Allah that the bushes, forests and farmlands belong to Igbo speaking people of South East and erring pastoralists caught up moving with cows from Community to Community from Monday 9/9/19, will taste the full Wrath of Igbo. “Miyetti Allah should be held responsible for daring peace loving people of South East. South East Governors and Ohanaeze will never bring policies that will divide Nigeria. “The recent 1700 forests guards in Enugu are properly trained, and soon the nefarious activities of the murderous bandits and herdsmen masquerading as pastoralists will be put on check.  “With the recent ban on herdsmen by South East Governors, we have finalized arrangements for the five South East State houses of Assemblies to enact laws on ban on open grazing so that full weight of the law will descend on any erring pastoralists caught up trespassing from one Community to Community. “Miyetti Allah Kautel Hole leadership should tender unreserved apology to the South East Governors or should be arrested for hate speech and provocative remarks capable of truncating peaceful environment in the South East.”
https://www.komback.com
Source:News Now.