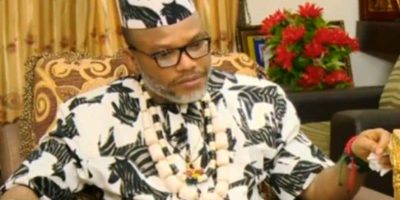 OZUBULU KILLING: NDIGBO DO NOT HAVE THE CULTURE OF CARRYING OUT MASS KILLING ? NNAMDI KANU
[video_embed name=”bishop-ozubulu”] The leader of the Indigenous People of Biafra, IPOB, Mazi Nnamdi Kanu has condemned the Ozubulu killing and called for forensic examination of the bullets used by the gun men so as to trace the killers.

Reacting to the barbaric incident, Kanu said he suspected some foul play and cover-up in the haste by the police to attribute the ?heinous crime? to alleged feud between two indigenes of the community based outside the country.

The IPOB leader faulted the police for their quick conclusion on the cause of the attack or the identity of the assailants without conducting thorough investigations, saying that the police should not have quickly ruled out terrorists from the attack without proper investigations.

According to him, there was nothing to suggest that the attack was not an act of terrorism.

Kanu noted that Ndigbo do not have the culture of carrying out mass killing for whatever reason let alone carrying such attac in a place of worship, insisting that it could be from terrorist act and called for thorough investigation.

?We are asking for a forensic examination to be conducted to ascertain the type of bullet used in the attack. It makes a mockery of the entire security system that people can work into a town and massacre innocent civilians and walk away. Where are the security agencies. ?All options should remain open because our people are not known for gang killings. It is alien to us. The only people capable of carrying out such heinous mass execution are the Fulani terrorists going by their antecedents.They are the ones who have been invading our farms and villages killing our people. So what makes this one different.

?Such atrocious crime has never ever been committed anywhere in Biafra land before. We are not known for mass executions. It was the same thing that happened at Uzo Uwani in Enugu State, the same scenario. ?I wonder why the narratives coming out is that it is two brothers who are feuding in far away South Africa. Is that possible? Does that make sense??, Kanu queried.

He lashed at the security agencies for the level of insecurity in the country, saying that they only show of strength when it comes to combating peaceful agitators. Kanu lamented a situation where rmed men easily move about undetected in spite of the heavy presence of security operatives and numerous check-points on the roads especially in the South East zone.

?Then where are all these security agents in our land; When we travel along the roads they are busy collecting money from our people, road blocks here and there. Before you travel a mile in Anambra you will encounter about 15 check points.

?How come all of them were sleeping or dozing when this attack happened? How is that possible? After the assailants must have gone then police will arrive to set up even more road blocks and check points. What type of society is that. That is why we want Biafra?, the IPOB leader said.