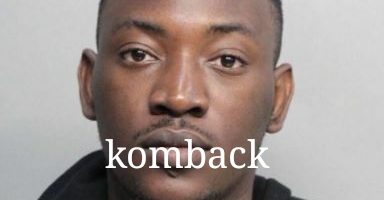 Dammy Krane To Appear In Court For Trial On August 1st

Nigerian singer, Dammy Krane was arrested weeks ago in the US for grand and credit card theft. However, His last appeareance in court was on July 23, 2017 but the media didn’t get any update on how the case went.
The latest update according to the Miami-Dade County Criminal Justice Online System indicates that there’s a new date for Dammy Krane’s trial in court.

He’ll appear for trial at 9:15am on Teusday, August 1, 2017 at the Justice Building, Room 4-3 with Courtney Erik as his defense attorney and Migiel De La O as the judge.
Dammy Krane was arrested and booked on the 2nd of June for theft, credit card and identity fraud in Miami. He was released a few days after he pleaded not guilty to the charges and met his bail condition that was set at $7,500.