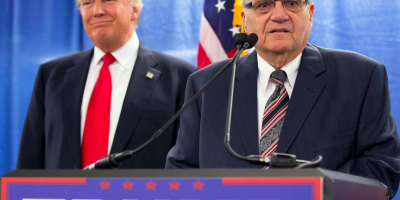 He lost a re-election bid last year. The 85-year-old lawman thanked Trump for the pardon and lauded him for “standing by law enforcement.”

Contents hide
1 Sen. John McCain of Arizona: Trump “undermines his claim for the respect of rule of law” with the Arpaio pardon.
2 House Minority Leader Nancy Pelosi: A “mockery of rule of law.”
3 Jeff Flake, the junior Arizona senator, said Trump should have let “the judicial process … take its course.”
4 Jeff Flake’s primary challenger Kelli Ward applauded Trump and called Arpaio’s actions as sheriff “heroic.”
5 Former Deputy Attorney General Sally Yates: Trump just revealed “his own contempt for our Constitution.”
6 Vanita Gupta, head of the Leadership Conference of Civil and Human Rights: Trump has “yet again damaged himself.”
7 Republican strategist and conservative commentator Ana Navarro: “It’s another slap in the face to the Latino community.”
8 Sen. Sheldon Whitehouse: “He does not deserve a pardon.”
9 California Rep. Nanette Barragan said the pardon is “sending the message it is OK to racially profile.”
10 The American Civil Liberties Union said the pardon is a “presidential endorsement of racism.”
11 Longtime Trump confidant Roger Stone: “Eat it, liberals!”
12 Rep. Joe Kennedy of Massachusetts: “Nobody is above the law. Period.”
13 California Secretary of State Alex Padilla: “Another attack on American values.”
14 Related

Sen. John McCain of Arizona: Trump “undermines his claim for the respect of rule of law” with the Arpaio pardon.

Sen. John McCain said in a statement on Friday:

“No one is above the law and the individuals entrusted with the privilege of being sworn law officers should always seek to be beyond reproach in their commitment to fairly enforcing the laws they swore to uphold. Mr. Arpaio was found guilty of criminal contempt for continuing to illegally profile Latinos living in Arizona based on their perceived immigration status in violation of a judge?s orders. The President has the authority to make this pardon, but doing so at this time undermines his claim for the respect of rule of law as Mr. Arpaio has shown no remorse for his actions.”

Flake?wrote on Twitter: “Regarding the Arpaio pardon, I would have preferred that the President honor the judicial process and let it take its course.”

Kelli Ward said on Friday: “We applaud the President for exercising his pardon authority to counter the assault on Sheriff Arpaio’s heroic efforts to enforce the nation’s immigration laws.”

Gallego?said: “By pardoning Joe Arpaio, Donald Trump has blessed Arpaio’s racist and unconstitutional police practices.?Trump’s pardon of Arpaio is unconscionable and unworthy of the White House.?This is Trump’s first pardon of a crony. Will it be his last?”

Sally Yates, who briefly served as deputy US attorney general after Trump’s inauguration,?said Friday: “With his pardon pen, POTUS reveals his own contempt for our Constitution, our courts, and our founding principles of equality and justice.”

Schumer?said: “As millions of people in TX and LA are prepping for the hurricane, the President is using the cover of the storm to pardon a man who violated a court’s order to stop discriminating against Latinos and nan courageous transgender men and women from serving our nation’s Armed Forces.?So sad, so weak.”

“Instead of seeking to unify the country as promised, POTUS?has doubled down on encouraging white supremacists post-Charlottesville.?Joe Arpaio ignored the courts and the rule of law in order to systematically target Latinos in AZ. The definition of racism and bigotry.”

Vanita Gupta, head of the Leadership Conference of Civil and Human Rights: Trump has “yet again damaged himself.”

WASHINGTON ??Vanita Gupta, president and CEO of The Leadership Conference on Civil and Human Rights, released the following statement after President Donald Trump issued a pardon for Sheriff Joe Arpaio:

?Instead of a dog whistle, President Trump picked up a bull horn and let out a hateful shout tonight when he pardoned someone who personifies the same bigotry and intolerance we witnessed in Charlottesville. For more than two decades, Sheriff Arpaio terrorized and profiled Arizona?s Latino citizens, was finally voted out of office, and was convicted for failing to follow a court order to cease his unlawful, racist policing.

The white supremacists, Neo-Nazis, and others the president excused heard his endorsement of racist and illegal policing policies loud and clear yet again. Trump has, yet again, damaged himself, the rule of law, and our country tonight. This pardon sends a dangerous message that a law enforcement officer who abused his position of power and defied a court order can simply be excused by a president who himself clearly does not respect the law.?

Sen. Chris Murphy of Connecticut: This is a “middle finger to America.”

Murphy?said: “The Arpaio pardon is basically a big middle finger to America. A loud, proud declaration that this Administration supports racism.”

Republican strategist and conservative commentator Ana Navarro: “It’s another slap in the face to the Latino community.”

“This is a slap in the face to the Latino community, to most of us in the Latino community ? perhaps not the guy who hates taco trucks ? but a lot of other Latinos see Joe Arpaio as a symbol of racism of discrimination, of racial profiling, of abuses of civil rights, and the president of the United States has seen fit to pardon him today in a very extraordinary move, and I think he didn’t do it in Arizona earlier in the week because he knew all hell would break loose.

Because he knew there would be thousands of impromptu protesters that would have shown up outside that rally to protest that act and what it would have meant. That’s why the mayor of Phoenix warned him not to go to Arizona, because he was afraid that he was going to pardon Joe Arpaio. and what that would mean in that community ? turning it into another Charlottesville.

Sen. Sheldon Whitehouse: “He does not deserve a pardon.”

“Arpaio systemically discriminated against AZ Latinos in defiance of our Constitution and ignored our courts,” Democratic Rhode Island Sen. Sheldon Whitehouse?said on Friday. “He does not deserve a pardon.”

“Now is a time to bind the wounds left by white nationalists? repugnant attacks in Charlottesville. Instead, President Trump has again doubled down on the side of ignorance, bigotry, intolerance, and hate.”

California Rep. Nanette Barragan said the pardon is “sending the message it is OK to racially profile.”

Barragan, who represents California’s 44th Congressional District,?said?the Arpaio pardon is “sending the message it is OK to racially profile and?defy a court order because?the president?will come and save you.”

The American Civil Liberties Union said the pardon is a “presidential endorsement of racism.”

The Georgia branch of the American Civil Liberties Union filed suit against the state over the ‘Allah’ case on March 23.AFP/File Karen BLEIER

“President Trump has pardoned former Sheriff Joe Arpaio of Maricopa County, Arizona, who was found guilty of criminal contempt for deliberately violating a federal court order that prohibited illegal detentions based only on suspicions about immigration status.

The ruling stems from an initial lawsuit brought by Latino residents of Maricopa who successfully challenged Arpaio?s policies of racial profiling and illegal detentions. The plaintiff class was represented by the American Civil Liberties Union and partner organizations. Arpaio repeatedly flouted court orders in that civil rights case, leading to both civil and criminal contempt rulings against him.

‘With his pardon of Arpaio, Trump has chosen lawlessness over justice, division over unity, hurt over healing. Once again, the president has acted in support of illegal, failed immigration enforcement practices that target people of color and have been struck down by the courts. His pardon of Arpaio is a presidential endorsement of racism.'”

Roger Stone indicated?he?saw the pardon as a political move. 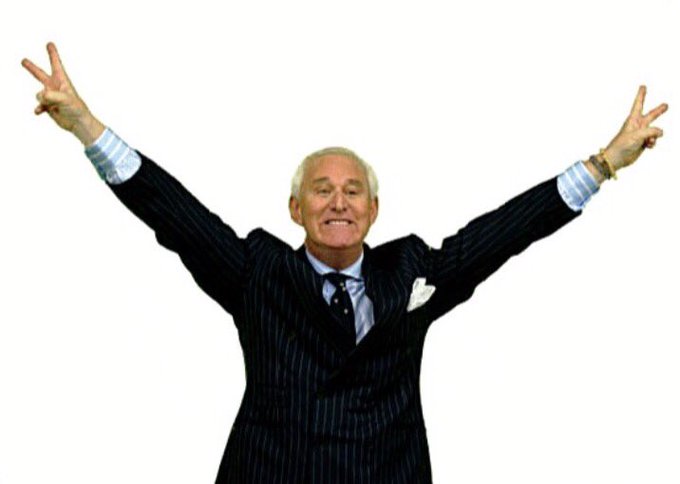 Rep. Joe Kennedy of Massachusetts: “Nobody is above the law. Period.”

Kennedy, who represents Massachusetts’ 4th Congressional District?said:?”Nobody is above the law, period. Tonight,?@POTUS?put bigotry before justice.”

Read Padilla’s full statement on the Arpaio pardon below:

“As if his abhorrent behavior wasn’t enough regarding Charlottesville, today Trump doubled down on his endorsement of racism in America.

Mr. Trump’s pardoning of Joe Arpaio is another attack on American values and makes a mockery of our justice system. Joe Arpaio is a convicted felon who openly promoted racial profiling and discrimination against American citizens who are Latina and Latino.

This pardon further divides our nation, fuels bigotry and undermines the rule of law. How long will our legislative leaders in Washington stand by and do nothing?”

High Blood Pressure Is On The Rise

Breast Cancer Is Becoming An Epidemic