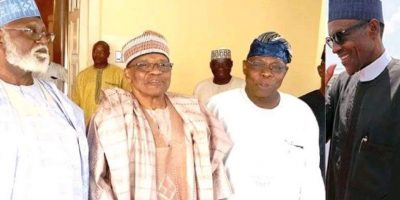 Punch reports
A lawmaker, Mr. Kassim Mohammed Kassim, has alleged that a search for President Muhammadu Buhari’s successor by three former leaders is a conspiracy against good governance which Buhari is entrenching through the fight against corruption.
Speaking under the aegis of The Democratic Youth Congress, Kassim accused the past leaders, notably ex-presidents Olusegun Obasanjo, ex-military president Ibrahim Babangida and ex-military Head of State Abdulsalami Abubakar, of not being comfortable with Buhari’s stance towards corruption.
The national chairman of the group, Kassim, who is also a member of the Nasarawa State House of Assembly representing Akwanga South, made the assertion in an interview with The PUNCH in Lafia on Monday.
Kassim said: I debunk media reports of purported hunt for the replacement of President Muhammadu Buhari by three former military presidents (sic).
He added that at no time did Buhari confide in any of them about his future political plans, noting that the said former leaders lack the moral standing to chart a political course for a country they ignominiously mismanaged.
He said such a move was not only an act of betrayal,but arson against the collective wishes of the Nigerian people.
The lawmaker however explained that the search smirks of hypocrisy and intent to cause political disharmony in the polity.
What have Obasanjo, Babangida and Abdulsalam Abubakar bequeathed to this country as leaders, if not corruption, nepotism, underdevelopment and values laced with mutual distrust and suspicion which has further compounded our journey to prosperity as a nation.
Enough is enough. We Nigerian youths have allowed such leaders to mortgage the future of this country.
We, Nigerian youths, would henceforth use any civil and political will to resist such attempt by past leaders to determine the common destiny of this great nation.
He pledged the group’s unflinching support to the emergence and continuation in office of President Muhammad Buhari beyond 2019.