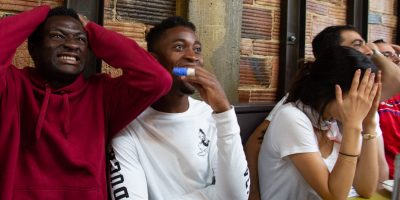 Watching the World Cup with a young Nigerian professional footballer in Seattle, U.S.

Seattle Sounders players, Ibrahim Usman (left) and Rodrigue Ele (second from left) react to a near miss by Nigeria in the World Cup match vs Argentina. Images: Danny Hoffman

?He?s small, but he is powerful,? Ibrahim Usman said of Ahmed Musa, Nigeria?s star forward. Squeezed into a corner table, Usman had only an oblique view of the modest television screen mounted over the bar. On it, Musa was celebrating his first goal against Iceland in the World Cup. ?When I kick him, I know I?ve kicked something.?

Usman is an 18-year old defender with Sounders FC 2, the United Soccer League (USL) farm team to Seattle?s Major League Soccer (MLS) franchise, the Seattle Sounders FC. Born in Lagos and raised in Kaduna, he and Cameroonian teammate Rodrigue Ele are the only African internationals on the S2 squad. (F?lix Chenkam and Nouhou Tolo, also from Cameroon, play with the first division team.) Four years from now Usman will be prime age for a national squad player. He has every intention of being a Super Eagle in Qatar.

On June 22, we met Usman and Ele at Caf? Presse in Seattle?s hipster Capitol Hill district, one of few venues live broadcasting Cup matches in the neighborhood. Our corner table was a lonely Nigerian outpost. A young man at the bar was staking a contrarian position, but he seemed more anti-Iceland than pro-Nigeria; next to us a table of Argentina fans offered a buffer and moral support. Otherwise, the crowd of roughly 45 patrons in the small Euro-themed restaurant were overwhelmingly, if somewhat sedately, Iceland fans. We were alone in a Nordic sea of blue and red.

Usman was nervous, but smiling. With every Nigerian success, he looked down the line of tables. ?I don?t want to shout,? he said. ?After the game, I?ll put my hood up and take my time before I go out.?

Caf? Presse may be the apsis of a professional Nigerian footballer?s orbit. But Usman?s path to the Super Eagles is less unlikely than it might at first appear. Conventional wisdom holds that the road to Africa?s national squads runs through Europe. In Russia, the Nigerians fielded players drawn almost exclusively from the English Premier League, La Liga, or other top-flight European leagues, and Usman confirmed that the national team coach prioritizes players plying their trade in Europe. Watching the Super Eagles from a faux-Euro cafe, playing second division ball in an American city proudly throwing its support behind tiny Iceland is a questionable variation on the typical European trajectory.

At the end of regulation, the caf??s Iceland supporters have yet to show their infamous Viking Clap.

But when Usman charts his own route to wearing the national colors, he emphasizes an overlooked aspect of that narrative: a surprising number of Nigeria?s professional footballers come from the same neighborhoods and played together as children. They may disperse to the far corners of the world, but they learn their craft at home. Players become national squad caliber in part because they are raised in the exceptional footballing neighborhoods of Lagos or Port Harcourt, Kaduna or Jos, and they grow up playing the world?s most competitive pick-up games.

The caf? gets progressively quieter as Nigeria thrashes the lackluster Icelanders, and Usman is more relaxed. He rattles off names on the Nigerian roster, the nation and division in which they currently play ? and how they fared in neighborhood small-side tournaments and afternoon matches of ?world cup.? He tells the story of an informal off-season match organized in 2015 by an agent in Jos, in which a 15-year old Usman squared up against Musa alongside Moses Simon, the KAA Gent striker whose own injury prevented him from playing in this year?s tournament.

Usman calls up a recent facebook post, in which he chided fans of the Super Eagles for their unduly harsh criticism of the team following the loss to Croatia.

Usman?s theory of professional development may not be iron-clad. But his running commentary at Caf? Presse does challenge the rescue narratives that hound African players: the lone rough diamond plucked from some obscure part of the continent, lucky to have his preternatural raw talent spotted by a wandering scout. Rather, local and international social networks play a vital role in the careers of developing players. And dreams of national team glory help even distant MLS and USL teams recruit international players, as Chris Henderson, the Sounders? Vice-President and Sporting Director, confirmed in conversation with us. It?s a path that Sounders left back Nouhou followed just last year. Capitalizing on a successful year with S2 in 2016, Nohou earned his first cap for Cameroon in a World Cup qualifier against Zambia in November 2017. If Usman?s unorthodox route to the Super Eagles via Seattle succeeds, then the distance between Caf? Presse in 2018 and Qatar in 2022 may be shorter than we think.
Share This Article