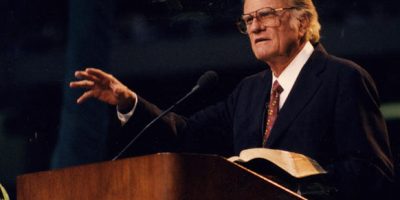 A private funeral will be held next week in North Carolina for US evangelist Rev Billy Graham, who died on Wednesday aged 99.

The service, which Donald Trump and a number of former US presidents are being invited to attend will take place in Charlotte, where Rev Graham was born.

His son Franklin will lead the eulogy and Rev Graham’s four other children will also pay tribute to their father.

The Billy Graham Evangelistic Association (BGEA) held a press conference on Wednesday evening at the Billy Graham headquarters in Charlotte to announce details of funeral plans and to talk about Rev Graham’s final moments.

Family spokesman Mark DeMoss announced that the preacher’s funeral service will be held on 2nd March at 12 pm.

It will take place near The Billy Graham Library in Charlotte in a tent, a tribute to Rev Graham’s first crusade in Los Angeles in 1949.

DeMoss said Rev Graham died in his sleep on Wednesday morning, and though no family members were present, his death was peaceful.

“It was described by nurse and doctor as a very peaceful passing,” he said.

“He was not in any pain, and he wouldn’t have suffered any.”

Rev Graham’s body was taken to Morris Funeral Home in Asheville on Wednesday and will be moved to Charlotte via motorcade on Saturday.

He will be buried beside his wife, Ruth, at the foot of the cross-shaped brick walkway in the Prayer Garden on the northeast side of the Billy Graham Library, in a simple pine casket made by inmates at the correctional facility in Angola, Louisiana.

Attendance to the funeral will be strictly by invitation only.

However, the public will get the opportunity to pay their respects when Rev Graham lies in repose on Monday and Tuesday at the Graham Family Homeplace at the Billy Graham Library.

Some 2,300 invitations will be sent for the funeral service, including to Vice President Mike Pence and former US presidents, Barack Obama, Bill Clinton, Jimmy Carter, George H W Bush and his son George W Bush.