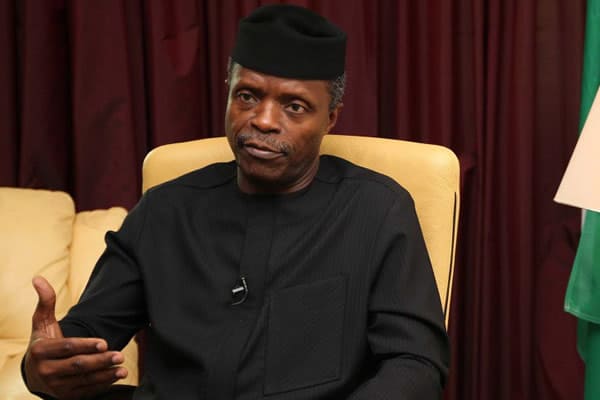 Vice President, Prof Yemi Osinbajo, has said that the Federal government is determined to complete the Second Niger Bridge and other ongoing projects in South East geopolitical zone.

He said that over 20,000 traders have benefited from the Federal government social investment programme known as Trader Moni and Market Moni for petty traders in Anambra State.

Osinbajo who stated this in Anambra State when he visited Eke Awka and Ochanja markets to monitor and meet petty traders to ensure that the money for social investment scheme gets to the actual persons meant for the programme.

The vice president on arrival in Onitsha visited the Obi of Onitsha, Igwe Nnaemeka Achebe in his palace and told him that the Federal government would continue to provide and support petty traders on the streets to alleviate poverty in the country.

The President of Amalgamated Markets Traders Association of Anambra State (AMATAS) Chief Okwudili Ezenwankwo, commended the Federal government for trader’s money programme, saying that it would go a long way in assisting the traders.

He said that the traders would continue to support the administration of Buhari to bring the dividend of democracy to the downtrodden and urged him to do more and increase the number of the beneficiaries in the state because according to him there were over two million traders in the state.

Some of the beneficiaries, Mrs. Uchenna Onya, Mrs. Precious Chidozie and Mr. Christian Onyekanne thanked the Federal government for the programme and promised that they would repay the money and go for higher sums to expand their businesses.