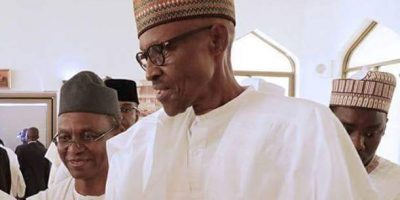 The newly inaugurated South-West office of the President Muhammadu Buhari 2019 Campaign Organisation has said that even if Buhari is not strong enough to withstand campaign stress and pressure in 2019, it would work to ensure his victory in the presidential election.
This was disclosed on Monday as the president’s supporters from the South-West zone and other parts of the country inaugurated the Buhari 2019 campaign office in Ibadan, while they also appointed coordinators.
They spoke under the aegis of the South-West Office of the President Muhammadu Buhari 2019 Campaign Organisation.
Among those who were present at the inauguration were former Nigerian ambassador to Qatar, Dr. Bawa Abdulahi; a member of the organisation’s Board of Trustees, Isaka Hassan; the group’s acting deputy national coordinator, Daniel Omofeso; Acting National Secretary, Deaconess Rita Solari Inko-Tariah, and others.
At the event, the group also appointed coordinators for the six states in the zone.
National Coordinator of the organisation, Danladi Pasalli, said the South-West had always played prominent role in the politics of the country, saying it was one of the pillars behind the success of the campaign organisation of Buhari in the last presidential election.
He said, We all know that the birthplace of this organisation is here in the South-West, it was nursed and brought up here.
The South-West have always supported the president whose pious concern is to reshape Nigeria and free it from all forms of unpatriotic activities.
Buhari is concerned with putting the country in a proper and realistic system so that the future of the next generation is guaranteed.
Passali said Buhari had made tremendous recovery in London, saying he would soon return to the country.
He said the organisation would, as part of its strategy to woo voters, assist farmers to get direct loans from the Central Bank of Nigeria.
Patron of the organisation in the zone, Ahmed Ajibade, said even if Buhari was not strong enough to withstand campaign stress and pressure, the group would work to ensure his victory in 2019 election.
We will not allow those who will suffer (sic) Nigerians to get to the throne, the masses will not allow them.
Everybody must rise in support of the president in his effort to transform Nigeria into a country of our dreams.
Buhari stands for honesty, simplicity and he is straightforward. He is the only one that is capable of transforming the country at this crucial time,Ajibade said.
The South-West coordinator of the group, Tunji Adeniji, noted that the official inauguration of all the state coordinators in the zone would soon be done.