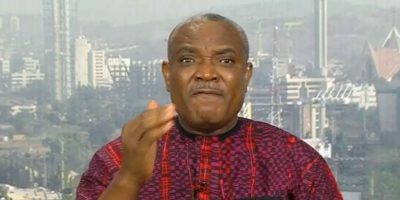 Tackles Falana Over Comments On Agf’s Powers
We Won’t Use Media To Discuss Our Relations With AGF EFCC
As the face-off between the Office of the Attorney General of the Federation (AGF) and the Economic and Financial Crimes Commission (EFCC) deepens, the Special Assistant to President Muhammadu Buhari on Prosecution, Chief Okoi Obono-Obla, has accused the anti-graft commission of compromising some of the high profile corruption cases it is handling.
Obono-Obla told Saturday Tribune in a telephone interview on Friday that the reason the anti-graft agency had refused to hand over files of high-profile corruption cases to the office of the AGF as requested was because they might have been compromised.
According to Obono-Obla, who was reacting to a statement made by a Senior Advocate of Nigeria (SAN), Mr Femi Falana, on Channels television on Friday morning that the EFCC is not answerable to the AGF, said the AGF, as the Chief Law Officer of the country, has the constitutional supervisory role over the anti-graft agency and all other agencies involved in the fight against corruption.
He stressed that the EFCC is under the supervision of the AGF as Section 174 of the 1999 Constitution (as amended) gives the AGF the powers to institute, take over or discontinue any criminal proceedings in the country.
Obono-Obla, who was recently appointed as the chairman of the Presidential Panel on Recovery of Public Property, said the inability of the EFCC to conclude the prosecution of the many high-profile corruption cases is giving the present administration a great concern.
According to him, Section 150 (1) of the Administration of Criminal Justice Act (ACJA) 2015 clothes the AGF with powers to issue advice or such other directive to the police or any other law enforcement agency in respect of an offence created by an Act of the National Assembly.
AGF may request from the police or any other agency for the case in any matter in respect of an offence created by an Act of the National Assembly and the police or other agency shall immediately send the case file as requested.
The EFCC may have compromised some of the high-profile corruption cases. That is why they did not want to release the case files to the AGF as requested, he said.
However, efforts by Saturday Tribune to get in touch with the Senior Special Adviser to the AGF and Minister of Justice, Comrade Salisu Othman, to confirm whether the EFCC had handed the AGF case files of high-profile corruption cases as requested, proved abortive as he refused to answer several calls made to his phone.
He was reported in the media to have said that the issue between his boss and the acting chairman of the EFCC, Ibrahim Magu, was an official matter, which was being handled officially.
Othman said there was no cause for alarm since the parties involved were working for the same government.
No conflict with AGF EFCC
When contacted, the Head, Media and Publicity of the EFCC, Wilson Uwujaren, said the commission does not discuss its communication with the office of the AGF in the media.
In the same vein, Uwujaren, in a statement on Friday, denied any face-off or an impending and damaging conflict between the commission and the AGF office as reported in the media.
Notwithstanding the fact that EFCC has been consistent in its position that there is absolutely no conflict (actual or impending) with the AGF, some unscrupulous persons have continued to push the false narrative into media headlines.
For the avoidance of any doubt, EFCC wishes to categorically state that it is compliant with all provisions of law and has no intention to stoke a misunderstanding over requests from the office of the AGF and Minister of Justice.Furthermore, the commission’s mandate, operational philosophy and the conduct and pronouncements of its officials do not countenance any activity on the fringes of the law. It is therefore untenable for there to be any suggestion that the EFCC or the commission’s principal officials are either in conflict with or readying for a showdown with the AGF or other officials of government, the EFCC spokesman said.
According to him,any such conflicts being paraded in the media exist only in the apparently fertile imaginations of corrupt elements angling to knock heads together in furtherance of their own pro-corruption agenda.
All the brouhaha raised in recent days over a non-existent conflict between the EFCC and the office of the AGF only go to underline the fact that corruption can and is fighting back in a variety of ways.
Uwujaren said the commission was a creation of statute and its operations and officials were guided by the provisions of those laws and regulations and as such, it was not and could never be in contravention of the law or opposition to constituted authority.