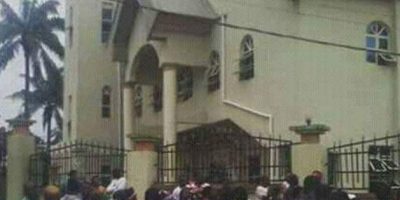 An unspecified number of people have reportedly been killed at St Phillip’s Catholic Church in Ozubulu, a town in Ekwusigo local government area of Anambra state.
A witness said some gunmen, who concealed their identities with masks, broke into the church around 6am when the first mass service was holding.
NAN quoted a witness as saying after they gained entry, the gunmen identified a particular man whom they shot.
He said the gunmen then went on rampage and shot at the remaining worshippers numbering over 100.
The source reportedly said some worshippers who were critically injured died on their way to the Nnamdi Azikiwe Teaching Hospital in Nnewi, the state capital.
Security personnel have cordoned off the church, which has since been deserted by worshippers.
Willie Obiano, governor of the state, Garba Umar, commissioner of police in Anambra, have visited the scene of the attack.

This act has nothing to do with fulani herdsmen, it is a drug fight that stretches from South Africa among our boys.

They came looking for one of their own who incidentally financed the construction of that church.

The guy in question single handedly built the church and asphalted adjoining Roads. His fellow drug partners who felt cheated out went to assassinate him in the said church.

We haven’t yet gotten details of how they left their target and killed innocent members, including the father of the guy that built the church. The Probably they missed target and in the ensuing pandemonium, and stray bullets brought down innocent people.