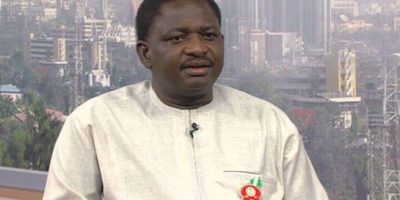 Femi Adesina, special adviser to the president on media and publicity, says the demands of the civil society groups that are staging a protest in Abuja, are not known to the laws of Nigeria.
In a statement on Saturday, the groups said Charly Boy, entertainer and activist, would lead a protest to demand that President Muhammadu Buhari resume office or resign.
Buhari has been receiving medical attention in the United Kingdom since May 7. His long absence has fuelled speculations about his health.
Speaking when he appeared on Sunday Politics, a programme on Channels Television, on Sunday, Adesina said the president would only return after his doctors certify him fit.
Asked if Buhari would comply with the demands of the group, he said: Well, the president would always do what is legal and constitutional. What they are asking for is not known to our laws.
The president will stand by our laws at all times. He will uphold the laws, he will protect them.
Adesina added that he could not state the period when the president would return but said it is in the public domain that Buhari is recuperating very fast.
The civil society groups have promised to continue their protest a sit-in  at the Unity Fountain in Abuja until the president either returns or resigns.
Today is the 90th day since President Muhammadu Buhari left the country on a medical tourism in London, they had said in a statement.
We are writing to inform the general public, local and international media, civil society groups that Mr Charles Oputa, AKA Charlie Boy and other prominent Nigerians will be leading the Monday daily sit-out at the Unity Fountain by 10am.
The flag-off of the daily sit-out will commence with a procession from the Unity Fountain to Aso Rock by 9am prompt.
The London leg of the protest which is scheduled to hold at the Abuja House, London by 11am (UK time) will be led by Comrade Chidi Cali, Barrister Bob and several others.
Other prominent Nigerians that have indicated interest in gracing the daily sit-out in demanding for President Muhammadu Buhari’s return or resignation from office are Nollywood actor, Jim Iyke and many others.