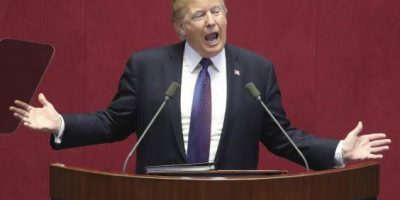 A federal appeals court ruled Tuesday that the Trump administration may, for now, require certain non-Mexican asylum seekers to wait in Mexico pending resolution of their cases.

A three-judge panel of the U.S. Court of Appeals for the 9th Circuit cited different reasons for permitting the “remain in Mexico” initiative to move forward after a lower court blocked it last month. The appeals court allowed the policy to continue only on a temporary basis, while the court considers broader issues in the case.

The ruling represents a victory for President Donald Trump, whose immigration policies have faced constant legal challenges. A federal judge in late November halted a separate Trump attempt to bar migrants from seeking asylum if they cross the border between ports of entry.

Judge Diarmuid O’Scannlain, an appointee of former President Ronald Reagan, authored the 11-page opinion and wrote that the administration was likely to succeed on legal challenges to the policy under federal immigration and regulatory law.

O’Scannlain also said the Homeland Security Department could face harm if a federal court order freezes one of its enforcement tools.

Get the latest on employment and immigration, every weekday morning

“DHS is likely to suffer irreparable harm absent a stay because the preliminary injunction takes off the table one of the few congressionally authorized measures available to process the approximately 2,000 migrants who are currently arriving at the nation’s southern border on a daily basis,” he wrote.

The other two judges — Obama and Clinton appointees — also backed allowing the policy to stay in effect, but raised questions about it in concurring opinions.

Judge William Fletcher, the Clinton appointee, argued that existing federal statute did not allow DHS to send migrants to Mexico under the program.

“The government is wrong,” he wrote. “Not just arguably wrong, but clearly and flagrantly wrong.“

A San Francisco-based district court judge first blocked the “remain in Mexico” policy in April. The judge said the initiative, formally known as the “Migrant Protection Protocols,” likely violated federal regulatory law. The Trump administration appealed the case to the 9th Circuit, which allowed the policy to be implemented immediately while it considered the issue.

The latest ruling keeps “remain in Mexico” in effect while the case continues before the appeals court.

Former Homeland Security Secretary Kirstjen Nielsen first announced the measure in late December, moments before she was set to testify before the Democrat-controlled House Judiciary Committee.

“Aliens trying to game the system to get into our country illegally will no longer be able to disappear into the United States,” Nielsen said in a written statement at the time.

The Mexican government agreed to accept the asylum seekers for humanitarian reasons, but described the policy as a unilateral move by the U.S.

Trump has portrayed the arrival of migrants at the border as an “invasion” and suggested many asylum seekers don’t have valid claims. In late April, he issued a memorandum that called for top immigration officials to develop several regulations to toughen and accelerate the asylum process.

The April memo urges administration officials to impose a fee on asylum applications, bar certain asylum seekers from obtaining work authorization while their applications are pending, speed up court decisions and limit other avenues of relief.