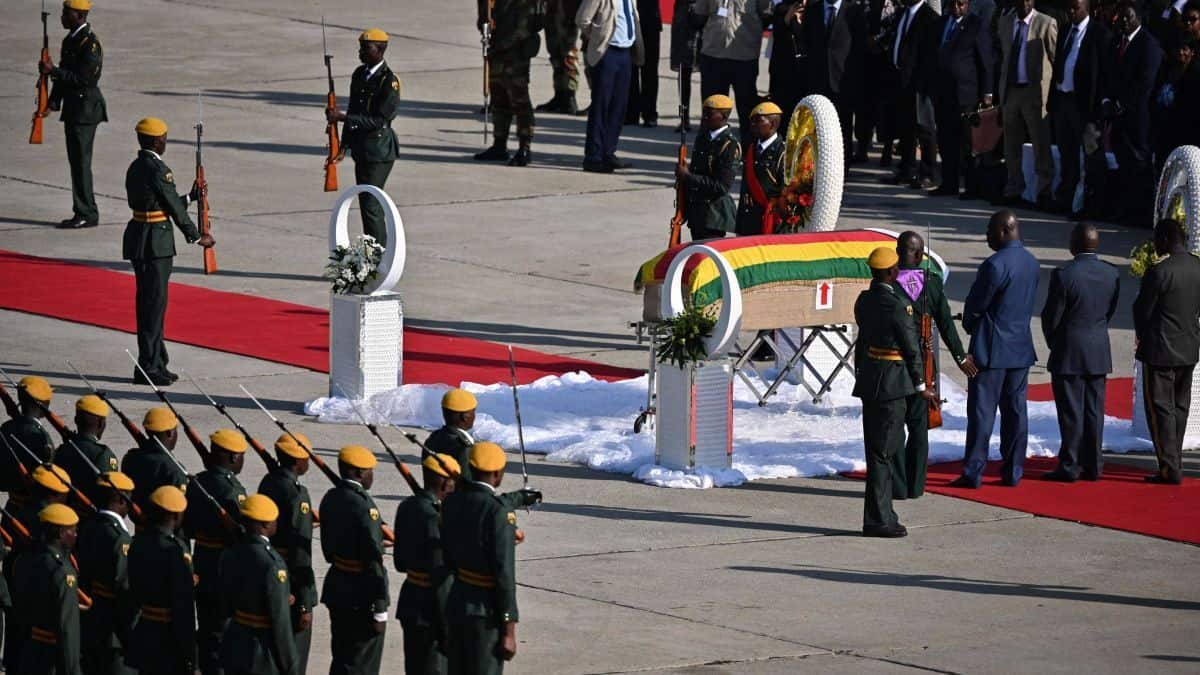 Foreign leaders, supporters and ordinary citizens were, on Saturday, attending the state funeral of Zimbabwe’s founder Robert Mugabe, after a week of disputes over his burial that threatened to embarrass his successor President Emmerson Mnangagwa.

Mugabe led Zimbabwe for 37 years, from independence until he was ousted by the army in November 2017.

His remains will be interred in a mausoleum at the National Heroes Acre in the capital Harare in about 30 days, his nephew said on Friday, contradicting earlier comments that burial would be held on Sunday.

Mnangagwa, Mugabe’s former deputy, who conspired to topple him, said late on Friday that building the mausoleum would delay the burial of the man who was once his mentor.

On Saturday, Mnangagwa walked behind the casket carrying Mugabe’s body as it was wheeled into the centre of Harare’s National Sports Stadium and placed on a podium decorated with flowers so that ordinary Zimbabweans could say their farewells.

“Today, let us put aside our differences and come together as we remember the past and look to the future as one proud, independent and free nation,’’ the president wrote on Twitter.

Mnangagwa and the ruling ZANU-PF party wanted Mugabe buried at the national shrine to heroes of the 15-year liberation war against white minority rule.

But some relatives, expressing bitterness at the way former comrades ousted Mugabe, had pushed for him to be buried in his home village.

Banners at the stadium, where Mugabe’s body lay in state ahead of the funeral, read “Hamba Kahle, Gushungo,” (go well, Gushungo)”, a reference to his clan name, and “Pioneer of nationalist politics”.

Cleo Mapuranga, a caterer, told Reuters: “I feel low because Mugabe fought for us.

“I remember him for land to the blacks, economic freedom and higher education, which was non-racial’’.

“Our finance minister is trying to implement first-world policies, which don’t work in third-world countries.’’

Mugabe’s death has made some Zimbabweans question what Mnangagwa has achieved in his two years in power.

His government has taken steps to cut the budget deficit, remove subsidies on fuel and power and repeal laws curbing public and media freedoms, but those reforms and austerity measures have compounded ordinary people’s hardships.

Mugabe was feted as a champion of racial reconciliation when he came to power in 1980 in one of the last African states to throw off white colonial rule.

By the time he was toppled in 2017 to wild celebrations across the country of 13 million people, he was viewed by many at home and abroad as a power-obsessed autocrat, who unleashed death squads, rigged elections and ruined the economy to keep control. (Reuters/NAN)