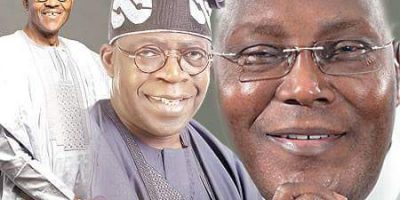 2019: BUHARI, ATIKU, KWANKWASO DIVIDE NORTH
NORTHERN political establishment appears split over who it should back as presidential candidate for 2019 from among those jostling for the highest job from the area.
While the Peoples Democratic Party (PDP) has zoned its presidential ticket to the North, the governing All Progressives Congress (APC) is expected to do same.
Findings by Sunday Tribune revealed that the North was divided into three camps along the lines of three of its leading presidential hopefuls.
These are President Muhammadu Buhari, who is said to enjoy the right of first refusal as incumbent, former Vice-President, Atiku Abubakar, a former governor of Kano State and serving Senator, Rabiu Kwankwaso.
Among these frontrunners, Atiku is said to have oiled his political machinery, consulting and setting up offices nationwide.
His pet project called the Atiku Care Foundation (ACF), though a not-for-profit organisation ministering to the needs of the common people, is said to be essentially a grass-root mobilisation body.
A member of the Kaduna State chapter of ACF, who spoke to Sunday Tribune on condition of anonymity, claimed that two former military heads of state, Generals Ibrahim Babandiga and Abdulsalam Abubakar, are backing Atiku for 2019.
He added that Atiku?s ?endorsement? was sealed recently within the context that he has the capacity to lead the country with his enormous experience as a former number two man.
It was also gathered that a clique of the northern establishment favours the emergence of Kwankwaso, who came second to Buhari during the APC presidential primaries.
His winning more votes than Atiku in the primary election formed the basis of some northern establishment to throw their weight behind his emergence.
Added to this consideration is his experience as a politician who has seen it all in the executive and legislative arms of government as an ex-governor, ex-minister and now a serving Senator.
?Having served as a governor, Minister of Defence and now a Senator, he has garnered for himself the clout to be Buhari?s successor in case the president is no longer interested,? said an associate of Kwankwaso.
A former president, Sunday Tribune learnt, is said to be backing Kwankwaso on the perception that the former governor would be better placed to continue the agenda already set Buhari.
But the recent news that President Buhari might arrive the country any moment from now has cast a lull on the rat race to succeed him in certain quarters in the North.
-Tribune