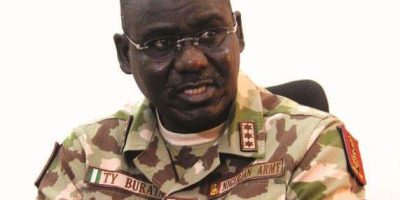 BOKO HARAM REMAINS TECHNICALLY DEFEATED ? BURATAI INSISTS
The Chief of Army Staff Lieutenant General Tukur Buratai has declared that terror sect, Boko Haram, will forever remain technically defeated.
He told reporters in Damaturu, the Yobe State capital that sustained onslaughts on the terrorists have rendered them ?technically defeated and they will never be as strong as they were previously.?
The COAS had met with Governor Ibrahim Gaidam after a visit to the 159 Battalion of the army in Geidam, north of Damaturu.
He also visited soldiers at Kanamma at the Nigeria/Niger border asking them to work towards ending the fight by clearing the remnant of the Boko Haram terrorists.
He charged them to be law abiding and respect rules of engagement as the military hierarchy will not take their welfare issues lightly.
The Army Chief assured them that the military under his leadership will continue to rotate the soldiers in the theatre of operation instead of allowing others to over stay in the war front.
The COAS recently directed the theatre commander to work towards delivering the Boko Haram leader Abubakar Shekau within 40 days, an ultimatum the military hierarchy said is still in force.
The highest military hierarchy has since then returned to the theatre of war in Adamawa, Borno and Yobe states to ensure that the renewed terrorist attack on soft targets are eradicated completely.
According to Prof. Osinbajo, militants, terrorists, hackers and economic saboteurs are re-inventing themselves with technology, thereby changing the very nature of warfare in the 21st century.
He warned the military to be mindful of the fact that the nature of warfare waged by these groups challenges conventional military strategies, and therefore must be innovative in how they confront current security challenges.
He further added that it is only by preparing and adapting to the changing nature of the security landscape that countries can win the war against terrorism, economic sabotage, and cyber crimes.
-The Nation