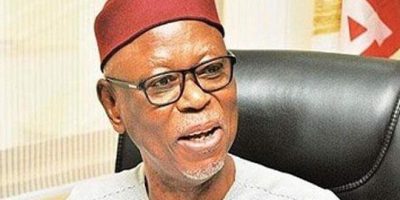 THINGS ARE DIFFICULT ECONOMICALLY, APC ADMITS
The All Progressives Congress has joined Nigerians to admit that things are economically difficult in the country. However, it said the diversification efforts of the President Muhammadu Buhari administration would be evident in a few years, saying the country would be counted as one of the industrial power houses in Africa.
National Chairman of the party, Chief John Odigie-Oyegun, who stated this in Abuja on Thursday evening, also said the present administration was building a new economic model which he said would be sustainable, production-based and would diversify from oil to agriculture, solid minerals and other viable sectors.
Odigie-Oyegun said this at the party?s national secretariat when he received political leaders from Delta Central Senatorial District, who defected from the Peoples Democratic Party to the APC. The defectors were led by a former Commissioner in the Delta State Oil Producing Area Development Commission, Chief Johnson Boro.
Other defectors who came with him were the immediate past PDP Chairman, Ughelli South Local Government Area, Chief Francis Aguonigho; Chief Sleek Oshare; Chief Isaiah Kekeje, Chief Mathew Kwode, Chief Robert Ojo, Mr. Sunny Ogbududu, Mr. David Edonor, Mr. Saturday Nukueye and Chief Charles Otaiye.
Oyegun said, ?Economically, things are difficult; there is no question about it. But in spite of that, people of your quality sat down and still want to join the boat because you have seen the future and you know the future belongs to a changed country. A country that produces, not only consumes.
?In the last 16 years of previous administrations, we just consumed. Thank God this nation brought President Buhari at the point it was about to collapse and all we are doing today is putting the pieces back together again.
?It is a difficult experience and as a result of that our people are going through some hardship. But there is no question at all that you can see the silver lining that is on the way.
?By the end of this year, we will be net exporters of rice. Today we have started formally to export yam. Today we are about certain that all the grains in this country can be produced locally. These are all parts of the building blocks towards the Nigeria that we foresee in another year or two.?
While welcoming the new members to the APC, Odigie-Oyegun said one of the resolutions of the party?s national leadership was ?to bring the South-South back into the mainstream of Nigerian politics.?
He described the zone as one of the ?strongest pillars for unity? in the country.
Speaking earlier, the APC National Vice Chairman (South-South), Prince Hilliard Eta, said the defection of the Delta Central leaders from PDP to the APC was testimony of the paradigm shift being witnessed in the South-South.
Boro thanked the APC leadership for the reception. ?We are delighted with the reception you have accorded us today. We now believe that we are coming to a home where we will be accepted,? he said.
-Punch