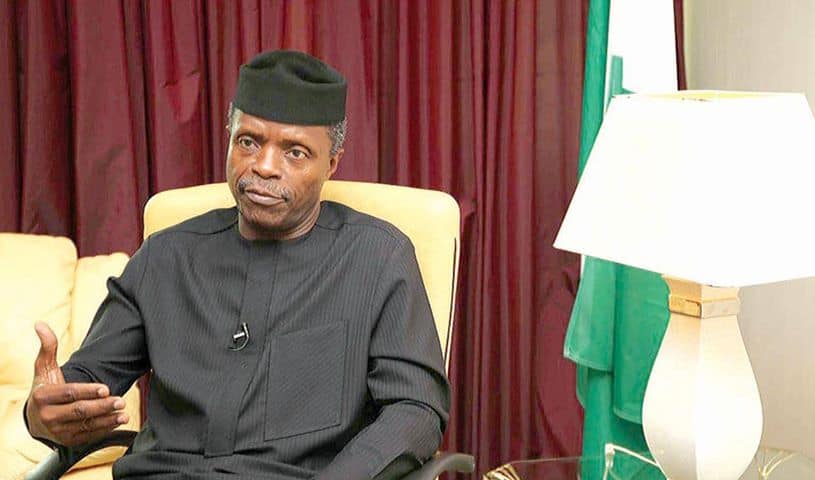 YOU ARE APPOINTMENT SEEKERS, OSINBAJO TELLS PROTESTERS OF MARGINALISATION

Acting President Yemi Osinbajo Wednesday took a swipe at those complaining about the marginalisation of their ethnic groups, saying they were opportunists seeking political appointments
The acting president, who spoke at a seminar on Unity and National Security organised by the Institute of Security Studies, Abuja, said most of the agitators were fighting for personal interest rather than the good of their ethnic groups.
?It is also not true that those who make marginalisation charges are altruistic. Often what they are saying is: I am marginalised, appoint me,? Osinbajo said.
He spoke against the background of the prevailing groundswell of agitations for the restructuring of the country, which many people and groups claimed was caused by the marginalisation of their ethnic groups.
The agitations had led to hate speeches from separatist groups that had sprung up all over the country.
But the acting president cautioned against the trend, saying those complaining about marginalisation were insincere and were only using it as a bargaining chip to feather their self-serving interests.
He berated the agitators for resorting to hate speeches, saying that it was inimical to the unity and development of the country.
While insisting that hate speech was not an exercise of freedom of speech, he warned: ?Hate speech precedes tragedies in human history.?
Osinbajo said the evidence that the agitators were self-serving could be found in the endemic nature of corruption, arguing that its perpetrators were from every ethnic group in the country.
?It is a false narrative that one group is more corrupt than the other. Not so. If you look at a corruption charge sheet, there is unity; you find all ethnic and religious groups equally represented in corruption. There?s complete unity in the business of corruption,? he said.
The acting president pleaded for restraints, saying Nigeria would be better and stronger as one united nation.
?It is a false narrative that we are better off when ethnic groups are on their own,? he said, contending that: ?while different groups have strength, we are better united.?
Osinbajo said it was untrue that nations that were formed the way Nigeria was formed were bound to fail, explaining that the term ?mere geographic expression? was not original to Nigeria.
The country had been in the grip of agitations from separatists agitating and clamouring for restructuring. This has also been worsened by the National Assembly?s rejection of the constitution amendment bill seeking to devolve more powers to the states.
-Thisday