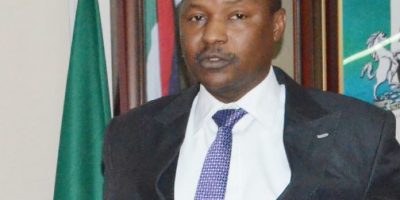 There were fears yesterday over the future of the Buhari administration?s anti-corruption war, following a letter from the Attorney-General of the Federation and Minister of Justice, Mr. Abubakar Malami (SAN).
The AGF is demanding for the outcome of some investigations and recommendations on such cases from the Acting Chairman of the Economic and Financial Crimes Commission (EFCC), Mr. Ibrahim Magu.
The letter is suspected to be a booby trap for Magu to show whether or not he will disrespect the directive of the AGF.
At the EFCC, officials are concerned that the AGF may use his constitutional powers to determine which cases to prosecute or discontinue.
It was learnt that the Presidency may, however, wade into the crisis of confidence between the AGF and the Acting EFCC chairman.
The AGF, in an August 1 letter (titled Compliance with the Economic and Financial Crimes Commission (Enforcement) Regulations 2010) signed by Abiodun Aikomo Esq, directed Magu to ensure ?compliance going forward?. There was no timeline for the submission of the reports on serious cases. Besides, such cases are not listed.
The letter said: ?I am directed by the Honourable Attorney- General and Minister of Justice to refer to the Economic and Financial Crimes Commission (Enforcement) Regulations 2010 (the Regulation) published in the Federal Republic of Nigeria Official Gazette No.61 Vol. of 21st September 2010, particularly the obligations of the Economic and Financial Crimes Commission (EFCC/the Commission)thereunder. The said Regulation is attached herewith for ease of reference.
?I am directed to refer specifically to Section 10 (1) which mandates the Commission to forward to the Attorney- General, in respect of a case of complaint which is serious or complex within the context of the Regulation, the outcome of its investigation(s) with its recommendations on whether there are sufficient grounds to initiate prosecution.
?The Honourable Attorney-General observes that the Commission has been in breach of the above cited provision of the Regulation for some time, hence this reminder to the Commission to ensure compliance going forward.
?Accept please, the assurances of the best of the Honourable Attorney General.?
The AGF?s directive has created some tension in the EFCC because it appears that the Minister has drawn a line.
A source, who spoke in confidence, said: ?We suspect that the AGF now wants to determine which serious cases to prosecute and those to discontinue.
?This is a replica of what we experienced about 10 years ago when a former Attorney-General of the Federation and Minister of Justice, Mr. Mike Aondoakaa(SAN), was trying to exercise his prosecutorial powers by cutting the former EFCC Chairman, Mallam Nuhu Ribadu, to size.
?We are all downcast because what we consider good cases might be rejected by the AGF. Yet, the Acting EFCC chairman cannot disobey the AGF.
?This is the second time the EFCC will go through this type of hurdle during the tenure of Magu. At a point, the National Prosecution Committee demanded for similar case files but we could not afford such a risk.?
The source added: ?We are expecting that the Presidency will intervene to manage the crisis of confidence between the AGF and the Acting Chairman of EFCC.
?Magu has nothing against the AGF but some forces are just creating bad blood between them.?
The office of the AGF said yesterday that it had no plan to take over high profile criminal cases from the prosecuting agencies handling them.
AGF spokesman Salihu Isah told The Nation that a letter from the Federal Ministry of Justice, requesting some prosecuting agencies to update the ministry with development in such cases was not an attempt to take over the cases.
He said such information was required by the National Prosecution Coordination Committee (NPCC) to enable it assess the cases, plan and offer strategic advice where necessary.
Isah, who also acts as the spokesman for the NPCC, which resides within the Federal Ministry of Justice, noted that the committee was empowered to seek such information from the various prosecuting agencies to enable it perform its responsibility of advising the AGF.
He said: ?The letter did not say they should hand over the cases to us. The committee wants to know the status of the cases so that they will know what to do to assist. It is not that we are taking over. The media appears not to understand what we are doing.
?You should know that the Federal Ministry of Justice, being the supervisory ministry for these prosecuting agencies, deserves to know the status of these cases. So, that is why we want them to furnish the ministry and the NPCC with information about the status of these cases.?
Isah drew attention to a statement he issued late last year at the inauguration of the NPCC, explaining the responsibilities of the committee.
Isah, in the statement issued last November, said the 19-man NPCC ?is charged with ensuring the efficient, effective and result oriented prosecution of high profile criminal cases in the country.
?The Committee is also to guarantee prompt contact and synergy between investigators and the prosecutors of high profile criminal cases, manage information to the public on such cases as well as to ensure strict compliance to the Administration of Criminal Justice Act (ACJA), 2015.
?For its terms of reference, the NPCC is to advise the HAGF on the exercise of his prosecutorial powers in Section 150 and 174 of the 1999 Constitution, prepare the policy strategy document for the coordination of investigation and prosecution of high profile criminal cases in Nigeria and to also collate the list of such cases as well as assigning them to prosecution teams.
?The Committee will scrutinise the proof of evidence and charges in high profile criminal cases in the country before arraignment. In addition, it will receive and analyse reports from the investigation and prosecution teams engaged to handle such cases.?
-The Nation