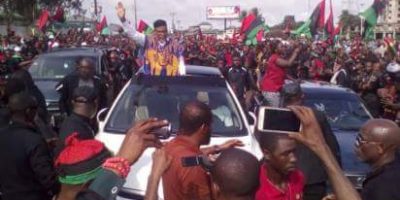 – IPOB warned Governor Umahi against picking a fight with the group, as they claimed that would certainly bring about his downfall

– According to the group, Ebonyi state is one of the strongest states in Biafran land, where the citizens are seriously determined to restore Biafra

– The state government blamed self-serving politicians for hijacking the IPOB agitation, and advised the rumor peddlers to look beyond political interests and focus on whatever interest that fuels their agitations

The Ebonyi state government has responded with disgust, after the Indigenous People of Biafra (IPOB) described Governor Dave Umahi as a rascal. According to reports, the pro-Biafra group stated that the governor exhibited ?the highest level of rascality? by allegedly instructing his ?henchmen, mostly miscreants? to attack traders at the Abakaliki Central Market, for welcoming their leader Nnamdi Kanu, during his recent visit. The group made its claim in a statement signed by its spokesperson Emma Powerful.

It read: ?The governor exhibited the highest level of rascality by instructing his henchmen, mostly miscreants to attack the innocent traders who turned out enmass to welcome their leader in Abakaliki, the Ebonyi State capital. ?The governor should know that at this moment, IPOB is without doubt the largest and most potent freedom fighting outfit anywhere in the whole world. ?We are firmly entrenched in Ebonyi State and we want to warn him that picking a fight with IPOB will bring about his downfall; we can pull him down with our supporters by just word of mouth, no violence, he should be warned. ?We also want to tell him that should he wish to continue serving his northern political masters, he should relocate to Sokoto because Ebonyi State is one of the strongest states in Biafran land, where the citizens are seriously determined to restore Biafra and governor David Umahi cannot quench the desire of Ebonyi people in this regard; rather Ebonyi people are ready to dump him because of attacks against IPOB and its leadership.? However, in a swift reaction, the Ebonyi state government refuted IPOB?s claims. According to the state government, it had never vilified anyone over the agitation for Biafra. The government?s position was contained in a statement signed by Governor Umahi?s chief press secretary Emmanuel Uzor. It read: ?As a matter of fact, governor David Umahi who was not and is still not in the country at the time of the visit of the IPOB leader could not have attacked any trader over the so called visit. ?Therefore, it has come to our notice that some self-serving politicians operating under various platforms have hijacked the agitation of IPOB in the state and have resorted to blackmail and unnecessary attacks on the state government. ?While the state government is not against any group genuinely agitating for whatever right they believe in, there is need for any agitation to conform with the principle of rule of law to the extent of guaranteeing maintenance of law and order. ?It is therefore unfortunate that those responsible for the dissemination of information in IPOB could not do the needful of carefully investigating any information fed them by some interested groups including opposition political party in the state before rushing to the press. “Let it be known that there was no attack on any part of the state on any trader as the state government is currently opening up the markets for optimum commercial activities by providing them with necessary amenities to ease business activities. ?Ebonyi State government therefore calls on peddlers of this rumor to look beyond political interests and focus on whatever interest that fuels their agitations as the governor is neither disturbed by the presence of the Biafran groups nor ruffled by their activities but is rather concerned about the welfare and security of Ebonyians.?

Recall that we previously reported that the leader of the Indigenous People of Biafra Nnamdi Kanu, stormed Ebonyi state on July 24, and was massively received by supporters and members of the group. The IPOB leader was reportedly forced to visit the state as a result of the attitude of the state governor towards the Biafra agitation.