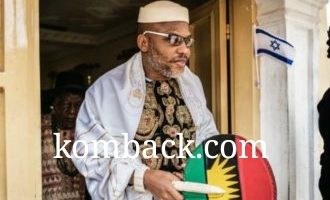 ?- The group accused him of not sitting down to address issues affecting the Igbos

– It said he has turned himself to a political errand boy

The South East Revival Group (SERG) has lashed out at the president-general of the Ohaneze Ndigbo, John Nwodo, asking him to address the issue of Igbo marginalisation. Premium Times reports that the group in a statement accused Nwodo of becoming a political tool. It said instead of defending Nnamdi Kanu, the Ohaneze Ndigbo leader chose to attack him and other Biafra agitators. Read the statement below: ?It is very unfortunate that the President General of Ohanaeze Ndigbo, rather than defend and promote the interest of Igbos, has made himself an available tool in the hands of Igbo detractors and non-Igbos, especially the Arewa irredentists, to denigrate Igbo nation, our sacred traditional institutions and prominent Igbo sons and daughters.

?Such despicable cases in recent time were when he decided to attack Nnamdi Kanu and his Indigenous People of Biafra (IPOB) agitators, a deviation from his earlier declaration as a father to the young Igbo people, who would have called his erring children into his bedchamber and counselled them, if he believed that they have missed the mark in their strategy for Igbo self-determination. ?Having forgotten so soon the apolitical nature of his office, in his bid to impress his newly found political allies, the Ohanaeze President General chose to openly castigate his acclaimed children after he has descended so low to represent a former military ruler at a book launch. ?Why is it a bit difficult for him to sit down in his office to coordinate the efforts to liberate Ndigbo from their oppressors in Nigeria by bringing together the Igbo self-determination agitators and other Igbo sons and daughters to find a common solution to the Igbo Question in Nigeria? ?Is he not worried to see how the northern youths that issued quit notice to Ndigbo are being pampered and caressed by their northern leaders while their counterparts in the Eastern region are being hunted down daily

It called on Mr. Nwodo ?to retreat and sit down at the Ohanaeze Secretariat in Enugu and attend to myriads of sociopolitical and economic challenges confronting Igbo people and receive anyone on a courtesy call as a leader of a prominent Igbo socio-cultural organization, rather than cheapen his position by joining political entourage and gallivanting all over the eastern region as a mere ?political errand boy.? Meanwhile, Kanu, on Wednesday August 2, tackled the Acting President Yemi Osinbajo, for declaring the Biafran agitation as unconstitutional. Vanguard reports that Kanu, in a world press conference he held through his team of lawyers in Abuja, maintained that Osinbajo?s view about Biafra was ?patently misconceived and inherently faulty?, despite his ran

k as a senior Advocate of Nigeria.