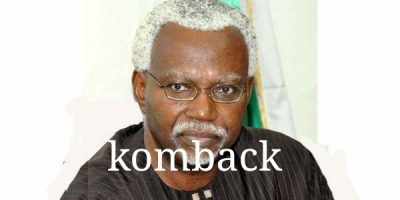 This was contained in a statement issued late Tuesday in Abuja and signed by the Director Press, Office of the Secretary to the Government of the Federation, Bolaji Adebiyi.

In his place, Prof. Bolaji Owasanoye has been appointed as chairman with a renewable tenure of five years. Owasanoye was part of the Prof. Itse Sagay-led Presidential Committee on Anti-Corruption.

?The appointment of the Chairman is for five years, while the tenure for all the members is four years. Also, these appointments are subject to Senate confirmation?, the statement added.

By the directive, Nta is now to proceed to the salaries, income and wages commission as a full-time commissioner. Other full time commissioners are Alhaji Dauda Yahaya, mni and Hon. Garba Musa Gulma. Part time commissioners are Barr. Victoria Nnenna Chukwuani, Mr. Geoffery Yeilong, Prof. Ropo Shekoni and Ahmed Mahmud Gumel while the Permanent Secretary, (Establishment), Office of the Head of Civil Service of the Federation OHCSF would serve as member.

?The new appointments are for a period of five years. The Chairman of the Commission is High Chief Richard Egbule, while Mr. E. A. Thompson is the Secretary. Both were appointed in August 2014?, the statement clarified.

In another development, ?the Acting President, with powers conferred on the President by Recovery of Public Property (Special Provisions) Act Cap R4, Laws of the Federation of Nigeria 2004 has approved the setting up of a Special Presidential Investigation Panel for the Recovery of Public Property. ?The Chairman of the Panel is Chief Okoi Obona-Obla, Special Assistant to the President on Prosecution. Mr. Akingbolahan Adeniran is the Secretary to the Panel?.